There is an excellent chance that western Washington is going to be hit by a major lowland snow event.

And yes, the mountains will be buried as well.

It is possible that some lowland areas will experience more than a foot of snow and February snow records will be broken at some locations.  Can I absolutely guarantee this?  No.  Is a major event highly probable?  Yes.

A big issue yesterday was the substantial difference in the snow forecasts of the American and European Center models, with the European model–generally the more accurate one– going for much more snow over western Washington.

Overnight the American model has moved towards the European solution.

Let me show you the accumulated snowfall over time from the European model.  And let me stress, snow depth will be LESS than total snowfall (what falls out of the sky), due to melting, settling and compaction, and other reasons.

The snow will begin on Thursday.  The snowfall total through 10 PM Thursday shows significant snow from north Seattle to Olympia, with the greatest amounts in the south Sound 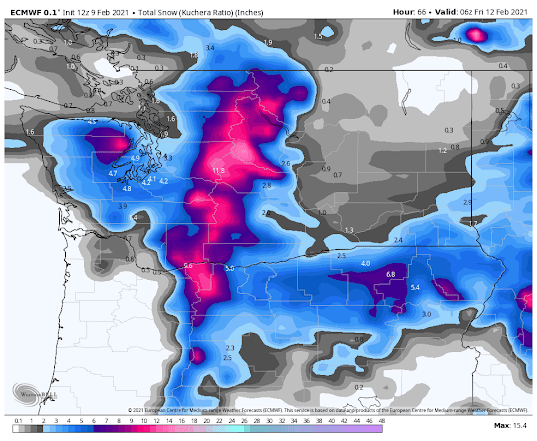 And the snow deepens by 10 PM Friday, with roughly a foot in the south Sound.  Huge amounts in the Cascades.  Too warm for snow in the Willamette Valley and the Oregon coast. 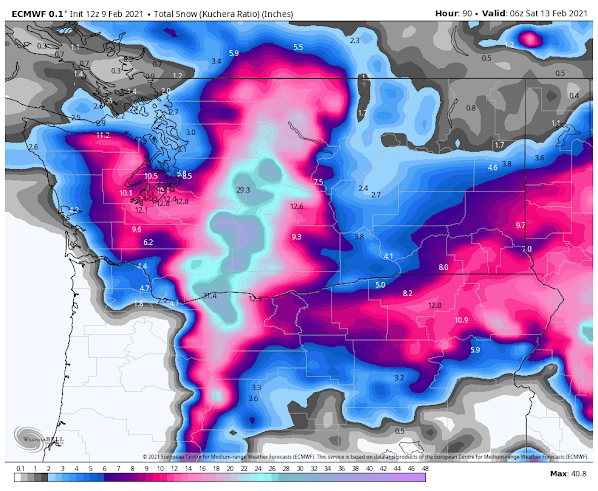 More snow hits on Saturday, with snow extending to Portland, cooled by air coming through the Columbia Gorge. Nearly a foot up to central Seattle.   Just crazy in the mountains. 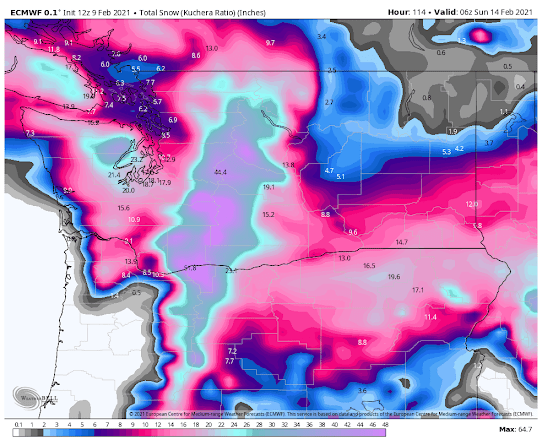 As I have told you many times, never look at a single forecast.  One needs to consider uncertainty, and ensembles of many forecasts help quantify it.  The 51 member European Center ensemble for snowfall at SeaTac Airiport is shown below, the top panel having 51 stripes, one for each forecast. Most members are going for a major snowstorm…perhaps 3 or 5 out of the 51 are not.  Nothing is certain.  You must deal with probabilities. 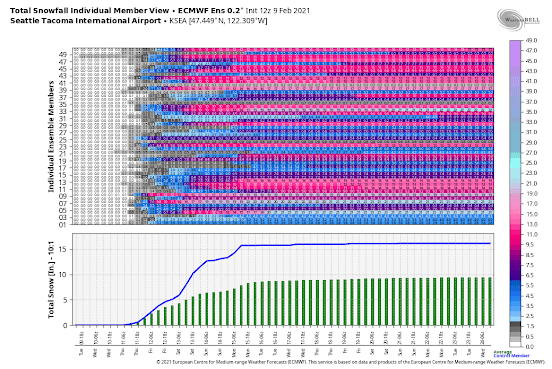 Importantly, the U.S. GFS model ensembles (only 21 members) looks similar, but with a higher percent of the members have less snow. 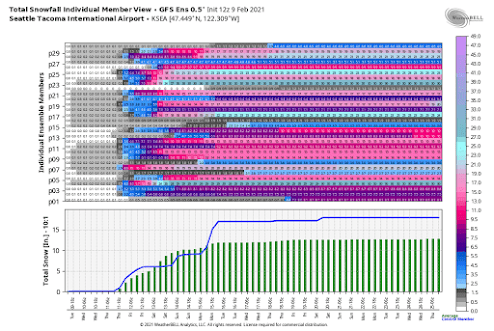 The high resolution U.S. GFS forecast (blue line) is going for ALMOST 20 inches of snow by late Monday.  Unbelievable.   And here is the U.S. GFS snowfall forecast through 10 PM Sunday.  24 inches in Tacoma, 20 inches in Seattle.   The mountains would probably be impassable if this forecast comes true. 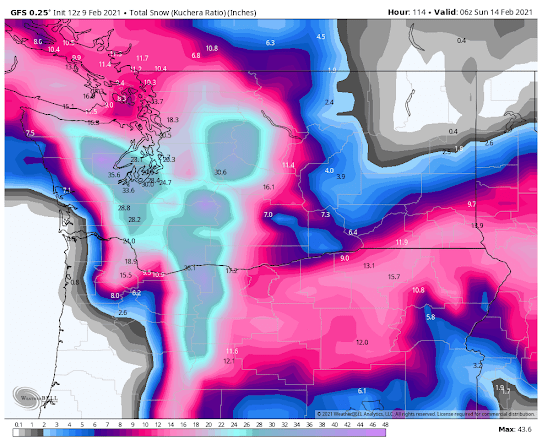 And there are subtleties that I haven’t talked about.  Strong easterly winds on the western slopes of the Cascades that should lessen snowfall between the Sound and the Cascades (because sinking air works against precipitation).  The unusually cold air east of the Cascade crest.  And much more.

I will probably do a special podcast about this event tomorrow (Wednesday).  There are a lot of moving pieces with this event and thus uncertainty…but at this point a major event appears to be in the cards.