We continue to monitor for severe weather this Easter Sunday. 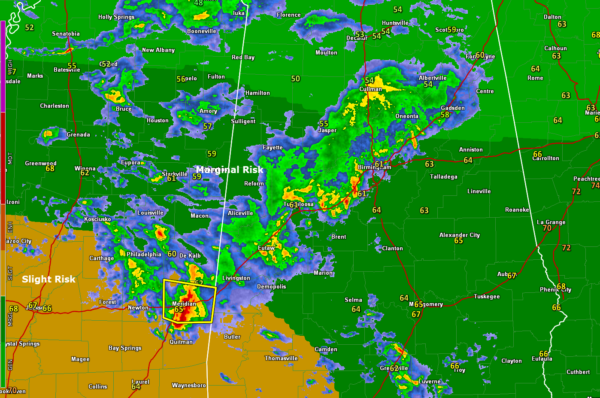 Right now, an area of rain with embedded thunderstorms is pushing southeast through the I-59 Corridor. It extends from Albertville and Gadsden down to Cullman and Oneonta, to Jasper and Birmingham, to Reform, Aliceville, and Tuscaloosa, and into eastern Mississippi.

Over Alabama, the storms are mostly not surface-based, meaning there is a stable layer near the surface, with instability aloft. This type of storm has a hard time producing anything worse than some hail and gusty winds.

The storm approaching Meridian MS does have a severe thunderstorm warning on it. The Weather Service in Jackson is saying that it could produce 1-inch hail and 60 mph winds. It is almost certainly producing at least small hail. It will push into Choctaw and southern Sumter County, Alabama, eventually heading toward Gilberttown and Needham, places that saw strong storms yesterday.

In fact, there is no surface-based instability anywhere over Alabama except in Mobile and Baldwin counties. But that will change as we go through teh day.

A weak surface low is expected to form to the west of our state. It will move across Central Alabama tonight. This will lift the frontal boundar that is to our south back northward as a warm front that will lie just north of I-20 by this evening. Dewpoints will rise back into the lower 60s over North Central and into the middle and upper 60s to the south.

Another complex of storms looks like it will form over northern Louisiana this afternoon, moving into West Central and Southwest Alabama this afternoon. It will be accompanied by plenty of bulk shear but little low-level helicity so the tornado threat is low. Damaging winds and hail will be the threats.

Tonight, a cold front will push a band of storms southeastward across Alabama. There may be sufficient low-level shear then for us to be concerned about a low-end tornado threat, as well as the threat of damaging wind gusts and hail. The area of concern will be the Tennessee Valley and North Central Alabama in the I-20 Corridor. This could occur during the late-night and early morning hours, so make sure you check back for updates throughout the day and have your Weatheradio on alert mode overnight.

The showers and storms will be out of Alabama by sunrise Monday with clearing and cooler conditions during the day.