RADAR CHECK AT 10:35 AM: We have a band of very light showers moving to the southeast across the southern half of Central Alabama that is behind the cold front that has already moved through the area. Expect these to continue to dissipate as they move southeast through the rest of the morning hours. Behind that, skies are starting to clear out over the northern and northwestern parts of the area.

Temperatures as of the 10:00 am roundup were ranging from the mid-50s to the upper 60s across the area. Haleyville was the cool spot at 54 degrees while the warm spot was Eufaula at 67 degrees. Highs will only climb just a little more during the afternoon, ranging from the lower 60s in the northwest to the mid-70s in the southeast.

For tonight and throughout the overnight hours, temperatures will steadily fall as skies continue to clear out and become mainly clear throughout the area. For those headed out to the football games or spending some time out and about, temperatures will start off in the mid-50s to the mid-60s across the area around 6:00 pm and fall into the mid-40s to the mid-50s by 10:00 pm. Overnight lows will bottom out in the mid-30s to the upper 40s across the area from northwest to southeast. Some patchy frost may occur in the extreme northern parts of Central Alabama.

SATURDAY: The beginning of the weekend looks to be absolutely brilliant as we’ll have sunny skies throughout Central Alabama. Afternoon highs will range from the upper 60s in the northwest to the lower 70s in the southeast. 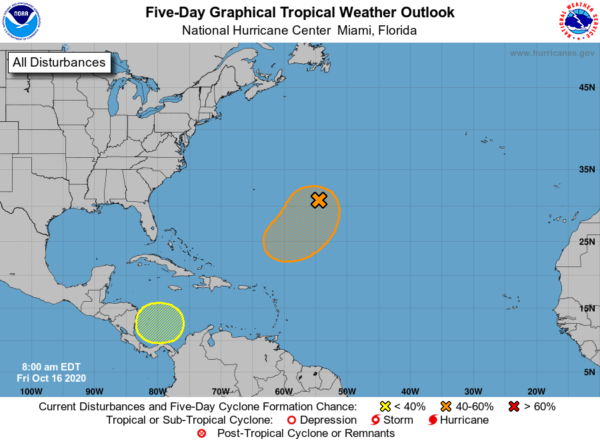 THE TROPICS: For the North Atlantic Ocean, the Caribbean Sea, and the Gulf of Mexico, we have a couple of areas that will need to be watched as some of the long-range forecast models have a potential tropical system just off of the east coast next week. Of course, this is just Voodoo Land territory at the moment, but here is what we have at the moment (from the NHC):

1. Shower activity associated with a broad non-tropical low-pressure system located about 600 miles east-southeast of Bermuda has become a little better organized this morning. Additional gradual tropical or subtropical development of this system is possible through the middle of next week while the low meanders over the central Atlantic well to the southeast of Bermuda.
* Formation chance through 48 hours…low…20 percent.
* Formation chance through 5 days…medium…40 percent.

2. A broad area of low pressure is expected to form early next week over the southwestern Caribbean Sea. Some gradual development of this system will be possible through the middle of next week while it remains nearly stationary over the southwestern Caribbean Sea.
* Formation chance through 48 hours…low…near 0 percent.
* Formation chance through 5 days…low…30 percent.

7:00 AM | *A bit cooler today with a continued risk of showers and storms* — Peraton Weather

7:00 AM | *A bit cooler today with a continued risk of showers and storms* — Peraton Weather