THIS WEEKEND: Today will be a less humid and more comfortable summer day across most of Central Alabama, as the front has stalled out over the extreme southern portions of the area. While a few isolated showers will be possible south of the front, the rest of the area will be dry. Highs will be in the upper 80s to the lower 90s with mostly sunny skies.

Sunday will be nearly identical to what we see today… mostly sunny with lower humidity levels. Only a stray shower or two will be possible over the extreme southern parts of Central Alabama. Highs in the upper 80s to the mid 90s.

NEXT WEEK: Moisture levels will begin to rise on Monday and a shortwave will move through the area. That will bring a very low chance of a few isolated showers and storms to the area during the late afternoon through the early evening hours. Highs in the lower to mid 90s.

A surface boundary will move into the northern parts of the area on Tuesday that will bring a quick shot of drier and cooler air for those locations, while the rest of the area will continue with a small chance of isolated showers. Highs will be in the mid 80s to the lower 90s.

A trough will settle in over the eastern parts of the country that will send multiple waves of energy through Central Alabama for the rest of the work week. Wednesday will feature a good chance of scattered showers and storms, some of which may be strong with gusty winds. Highs will be in the 80s across the area.

Rain chances will stay elevated on Thursday as the pattern looks to stay active across the area. While some sunshine is possible, the day looks to be mostly cloudy, with scattered to numerous showers and storms possible. Highs in the mid to upper 80s.

And at the end of the forecast period on Friday… Rain chances will remain elevated, but the coverage of scattered showers and storms look to be a little less across Central Alabama. Highs in the mid to upper 80s. 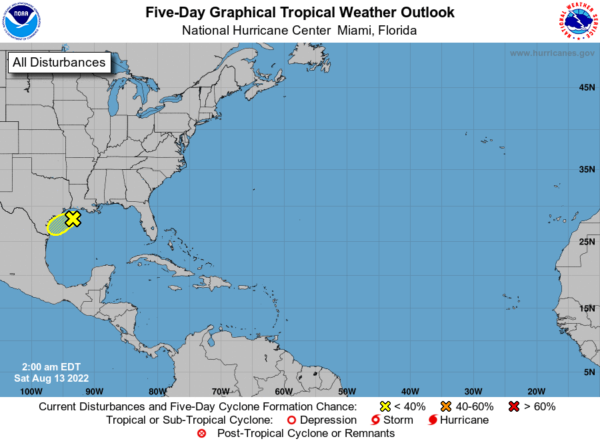 THE TROPICS: We have a trough over the northwestern Gulf of Mexico that is producing a small amount of shower activity. It is projected to move slowly to the west-southwest, but further development looks slim at the moment. The NHC is only giving it a 10% chance of developing into a depression over the next couple of days. The rest of the Atlantic Basin remains quiet.