BENIGN LATE SUMMER WEATHER: Alabama’s weather looks fairly quiet this week; today will hot and humid with a few widely scattered showers or storms around this afternoon, much like yesterday. The high today will be in the low 90s in most places; it should be the hottest day of the week.

Scattered showers and storms will be a bit more active tomorrow afternoon and evening ahead of a surface front. The chance of any one spot seeing rain today is 15-25 percent, and 35-45 percent tomorrow. Most of the showers and thunderstorms will come from around noon to midnight.

WEDNESDAY THROUGH FRIDAY: Drier air moves into the northern 2/3 of the state, and most communities will be dry Wednesday and Thursday. The sky will be mostly sunny both days with highs in the 87-90 degree range, and scattered showers will be confined to the far southern counties. Moisture returns northward Friday, and a few random, scattered showers and storms could form during the afternoon and evening hours. Friday’s high will be in the upper 80s.

LABOR DAY WEEKEND: We are forecasting very routine early September weather for the holiday weekend. Partly sunny days, fair nights, and a few pop-up afternoon and evening showers and storms each day. Of course, no way of knowing in advance exactly when and where they form in advance. The chance of any one spot getting wet daily is 30-40 percent, and most of the showers will come in the noon to midnight window. Afternoon highs Saturday through Monday will be in the mid to upper 80s, very close to seasonal averages.

Same situation along the Gulf Coast over the long weekend; about 6-8 hours of sunshine daily with a passing shower or thunderstorm from time to time.

NEXT WEEK: We will keep a persistence forecast going for the rest of the week with partly sunny days and scattered, mostly afternoon and evening showers and thunderstorms Tuesday through Friday. Highs will remain mostly in the mid to upper 80s… See the daily Weather Briefing video for maps, graphics, and more details. 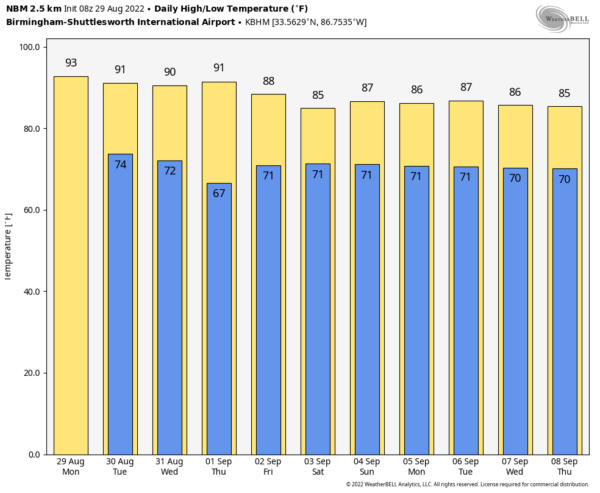 TROPICS: NHC is monitoring several tropical waves; most of them have a low chance of any development. The main one to watch is in the central Atlantic; Invest 91L. It is a broad area of low pressure, and is producing a large area of disorganized cloudiness and showers.Although environmental conditions ahead of the system are currently only marginal favorable, some gradual development of this system is expected over the next several days and a tropical depression is likely to form later this week. The disturbance is forecast to move slowly toward the west and then west-northwest at 5 to 10 mph, toward the waters east and northeast of the Leeward Islands.

Based on the projected upper air pattern, this system will likely turn north, and then northeast before reaching the east coast of the U.S. 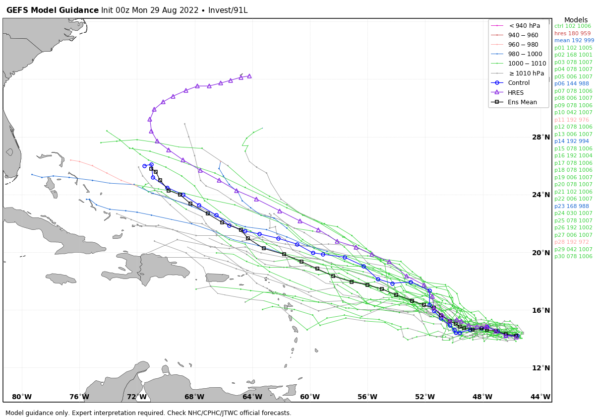 We stress there is NO risk of a tropical storm or hurricane in the northern Gulf of Mexico, or anywhere near the Central Gulf Coast (Gulf Shores to Panama City Beach) for at least the next 10 days.

ON THIS DATE IN 2005: Hurricane Katrina made its final landfall near the mouth of the Pearl River, with the eye straddling St. Tammany Parish, Louisiana, and Hancock County, Mississippi, on the morning of August 29 at about 9:45 AM CT. It weakened from a category five to a category three at the time of landfall, but it still caused over 1,800 fatalities and $125 billion in damage, especially in the city of New Orleans and the surrounding areas.

Flooding, caused largely as a result of fatal engineering flaws in the levees around the city of New Orleans, precipitated most of the loss of lives. Eventually, 80% of the city, as well as large tracts of neighboring parishes, were inundated for weeks. The flooding also destroyed most of New Orleans’s transportation and communication facilities, leaving tens of thousands of people who had not evacuated the city prior to landfall stranded with little access to food, shelter, or other basic necessities.

The Gulf coast of Mississippi suffered extremely severe damage from the impact of Hurricane Katrina on August 29, leaving 238 people dead, 67 missing, and billions of dollars in damage: bridges, barges, boats, piers, houses, and cars were washed inland. Katrina traveled up the entire state; as a result, all 82 counties in Mississippi were declared disaster areas for federal assistance, 47 for full assistance.