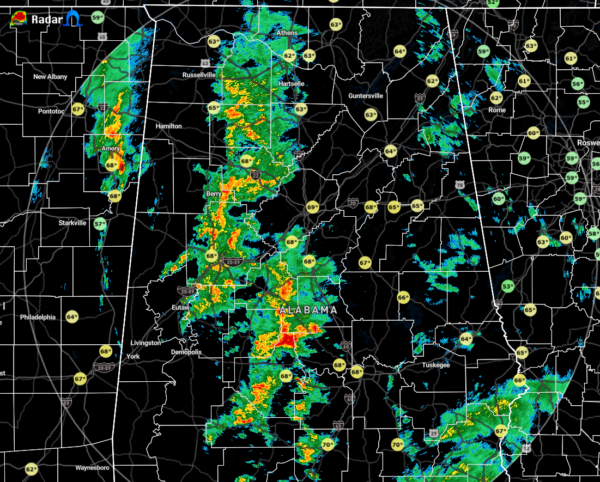 Radar as of 4:49 am shows a ragged line of showers and storms moving through the west-central parts of North/Central Alabama stretching from north of Athens, through Tuscaloosa, and through Selma. The strongest cell at this point is about to move across the state line from Mississippi and affect the western parts of Lauderdale, Colbert, and Franklin counties. Gusty winds up to 40 MPH will be possible. Temperatures are ranging from the lower 60s in the north to 70 degrees in the south. Birmingham was at 69 degrees.

TODAY: While the SPC continues to have nearly all of North/Central Alabama in a Marginal Risk, the latest update from NWS Birmingham (as of 2:24 am) shows that the threat for stronger to severe storms will be south of a line from Demopolis to Clanton to Alexander City. Isolated damaging wind gusts up to 60 MPH and a brief tornado may be possible in those locations. North of that line, any rain and thunderstorms should stay below severe limits.

Instability has been decreasing throughout the pre-dawn hours so far, and that trend should continue until we get to sunrise. After that, a little instability may form along and ahead of the cold front, in those locations I mentioned earlier, as it moves through the area. A good bit of shear will be in place during that time and that is why NWS Birmingham is sticking with that small risk for those locations.

Rain will start to come to an end for the western counties this morning, drying out in the central locations by early afternoon, and exiting the state by the late afternoon or early evening. Don’t expect a cooldown yet behind the front, as afternoon highs will reach the upper 60s to the mid-70s. Some sunshine may break out today behind the front before sunset hits.

THE CENTRAL ALABAMA WEEKEND: The cold front will stall out just to the southeast of Central Alabama and another shortwave will move across the area. There will be a very small chance of light showers over the northwestern corner of the area, with the I-59 corridor staying dry, and showers more likely over the southeastern corner of the area, mainly along and south of the I-85 corridor. Highs will be in the mid-50s to the mid-60s.

The cooler air finally moves into Central Alabama for Sunday. Skies will start off partly to mostly cloudy, but many of those clouds will move out throughout the day and skies will become mostly clear. Highs will be in the upper 40s to the mid-50s.

NEXT WEEK: We’ll stay dry with very nice weather and moderating temperatures for the first half of the week. We can expect mostly sunny skies for Monday and Tuesday before clouds start to move in on Wednesday ahead of our next system. Highs will start off in the mid-50s to the lower 60s on Monday, making it into the upper 50s to the mid-60s on Tuesday, and once again reaching the upper 50s to the mid-60s on Wednesday.

A cold front will move through Central Alabama late on Thursday evening through the overnight hours that will bring showers and a few thunderstorms to the area, but the models have backed off on the amount of instability that will be available. Therefore, severe weather is not possible at this time. Before that, we will be dry with clouds on the increase. Highs will be in the mid-50s to the mid-60s.

Skies will be clearing out on Friday after rain exits the area by late afternoon. Much colder air moves in behind the system, but highs look to reach the lower 50s to the lower 60s.

7:00 AM | *An unsettled start to the week with chance of showers and thunderstorms next few days* — Perspecta Weather

7:00 AM | *An unsettled start to the week with chance of showers and thunderstorms next few days* — Perspecta Weather