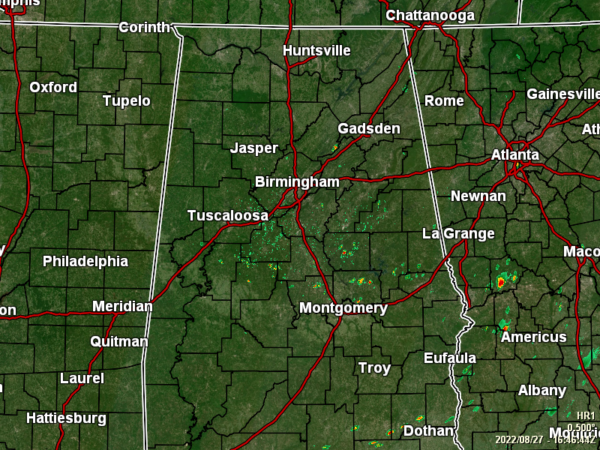 RADAR CHECK: As of 11:45 am, we have a few isolated showers over the south-central parts of the area that are small in size. We also have a couple of showers just west of I-59 to the southwest of Gadsden. Other than that, the rest of Central Alabama is dry with pretty warm temperatures. As of the 11 am roundup, temperatures were in the 80s across the area. Anniston and Sylacauga were tied at 87 as the warm spots. Alexander City, Demopolis, and Talladega were tied at 83 as the cool spots. Birmingham was sitting at 86.

REST OF TODAY: It will be hotter in the northern half of the area as scattered showers and storms are expected to fire up during the afternoon mostly over the southern half. Only a few isolated showers will be possible along and north of I-20. Afternoon highs will get up into the upper 80s to the lower 90s. Rain chances will decrease as the sun goes down this evening, and nearly all activity should have ended by your late local newscast. Lows will be in the lower to mid 70s.

SUNDAY: Rain chances will be a little higher across the area on Sunday as we’ll have more of a southerly flow across the area. Skies will be mostly sunny, with a few scattered showers and storms forming during the afternoon hours. While everyone will have a good chance of rain, the highest activity will once again take place over the southern half of Central Alabama. Highs in the upper 80s to the lower 90s. 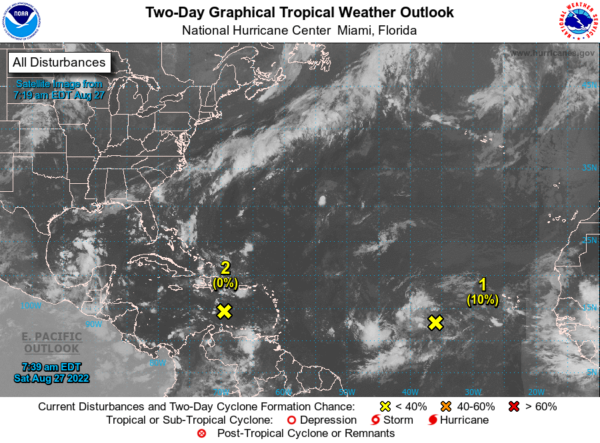 Central Tropical Atlantic: A broad and complex area of low pressure over the central tropical Atlantic Ocean is producing disorganized showers and thunderstorms. The interaction of this feature with an approaching tropical wave could support some gradual development of the system during the early and middle parts of next week while it moves westward to west-northwestward at about 10 mph across the central tropical Atlantic.
* Formation chance through 48 hours… low… 10 percent.
* Formation chance through 5 days… low… 30 percent.