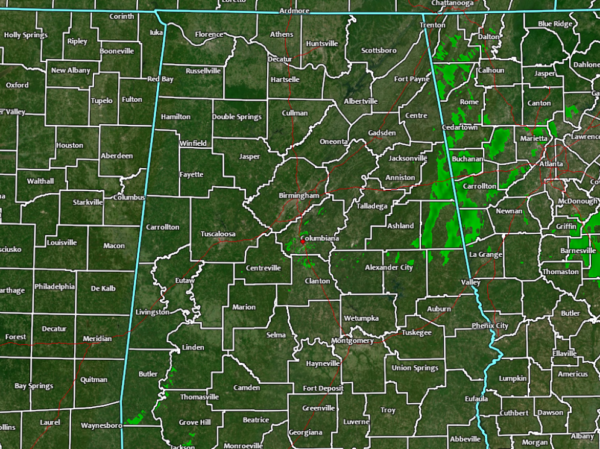 As of 11:00 am, much of the shower activity has pushed out of Central Alabama except for a few showers remaining over parts of Cleburne, Clay, Randolph, Tallapoosa, and Chambers counties in the eastern parts of the area. The rest of North/Central Alabama has dried out for now. Icy conditions continue for those counties remaining in the Winter Weather Advisory until noon today. We have heard of several accidents caused by icy roads and bridges, along with a few trees that have fallen in portions of Cullman County. Temperatures across the area were ranging from right at 30 degrees (Haleyville) to as warm as 52 degrees (Troy). Birmingham was sitting at 36 degrees. 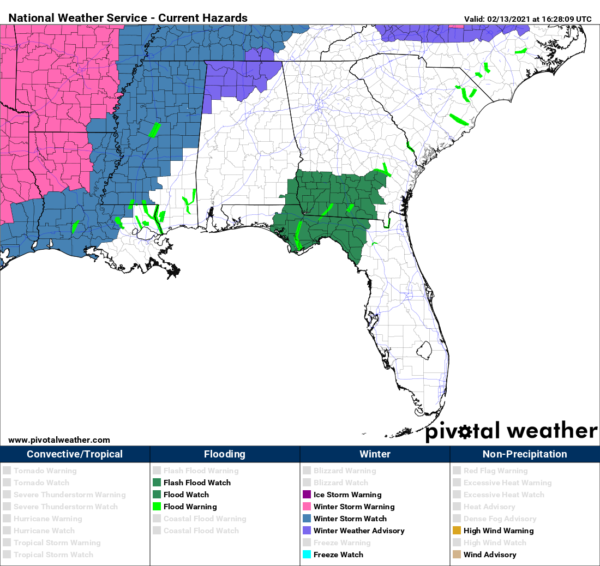 Showers will continue to decrease through the remainder of the day and temperatures will eventually top out in the mid-30s to the mid-50s across the area from northwest to southeast. Unfortunately, there will not be much sunshine at all, so any slick spots may not melt until around or after the midday hour. A few showers will be possible over the southeastern parts of the area tonight, but the rest of Central Alabama will remain dry. Lows will get down into the upper 20s to the mid-40s across the area. Any lingering moisture on elevated surfaces and bridges may refreeze tonight in the far northwestern corner of Central Alabama where temperatures will fall below freezing.

A few light passing showers will be possible across the area during the morning and afternoon hours on your Sunday, but slightly heavier activity looks to move into the northwestern parts of the area by the evening. Some of that activity may be in the form of freezing rain or sleet once the sun goes down and temperatures start to fall. Highs will be in the mid-30s to the mid-50s across the area from northwest to southeast. 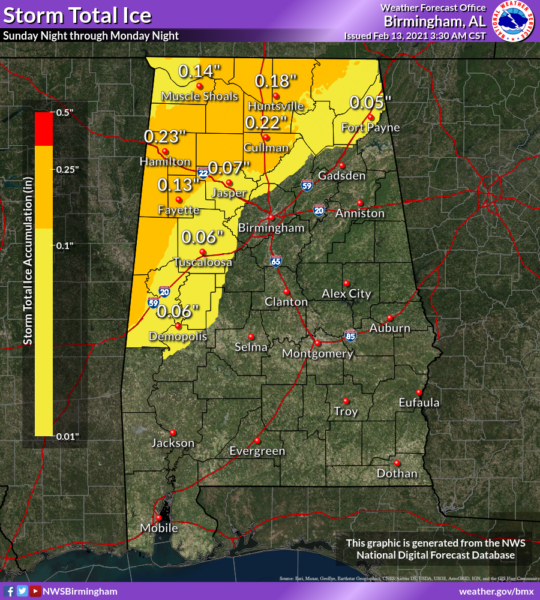 Much of Monday morning looks to be dry, but showers and the potential for freezing rain and sleet will begin to move into the western parts of the area before midday. It is still a tricky situation to forecast because it all depends on temperature, the intensity of the rainfall, and ground temperatures if there will be any ice accumulations. At this point, the best probability for accumulating ice will be along and west of a line from Demopolis to West Jefferson to Fort Payne. South and east of that line will be just a cold rain for the rest of the area.

The European is similar in its latest projections, but the timing has the freezing rain starting mid-afternoon and persisting through the late-night hours, with all activity out of the area by midnight.

Some travel issues may be possible in those locations where accumulations may occur, especially on bridges, overpasses, and any other elevated surfaces. While all the activity will be out of the area just before midnight, overnight lows may allow any accumulated ice to stick around through the overnight hours. Highs will top out in the upper 20s to the lower 60s across the area from northwest to southeast, but eventually dropping into the mid-teens to the mid-30s for the overnight lows.

Those icing issues may hang around through the morning hours on Tuesday as it will take a while for those locations to make it above freezing. Skies will eventually become mostly clear by the evening hours and highs look to top out in the lower 30s to the lower 50s across the area from northwest to southeast.

The good news is that Wednesday will be a little warmer and there will not be any icing issues. Unfortunately, clouds will be working back into Central Alabama throughout the day, and showers will become possible by the evening hours. Highs will be in the lower 40s to the lower 60s.

Thursday still looks to be a really wet day across Central Alabama as a surface low will be working its way northeastward through the western parts of the area throughout the day. At this point, severe weather does not look likely, but there will be enough instability that a few rumbles of thunder will be possible. Highs will top out in the mid-40s to the mid-60s across the area from northwest to southeast.

Shower activity will be moving out of the area before sunrise on Friday morning, and we’ll be left with decreasing clouds and cooler temperatures behind the low and departing cold front. Highs will be in the lower 40s to the lower 50s.