FRONT APPROACHING: We will bring in a chance of showers for Alabama later today and tonight, ahead of a surface front approaching from the northwest. Nothing too heavy or widespread; otherwise the day will be mostly cloudy with a high in the 75-79 degree range. Showers will be more numerous tomorrow, and there could be a rumble of thunder in spots… highs hold in the mid to upper 70s. Rain amounts between now and tomorrow night will be around 1/2 inch for most of the state.

Then, drier air returns late tomorrow night, and on Thursday the sky becomes partly sunny and humidity values will be lower. Friday promises to be a nice fall day; we begin in the 48-52 degree range, followed by a high in the low to mid 70s. The humidity will remain low Friday.

THE ALABAMA WEEKEND: Great uncertainty remains in the forecast due to the tropical system in the Gulf. For now, we will mention a chance of showers both Saturday and Sunday, but at the moment we are not expecting a “wash out” kind of situation. If you have something planned outdoors, just be aware that a shower could pass by from time to time. Otherwise, the weekend will be mostly cloudy with highs in the 70s.

NEXT WEEK: Global models are advertising a nice surge of cooler, drier air for much of the week. No rain, highs mostly in the 60s and lows in the 40s. See the Weather Xtreme video for maps, graphics, and more details.

ETA: Tropical Storm Eta, with 50 mph winds, remains in the far southern Gulf of Mexico this morning. The latest NHC forecast track moves the system slowly northward in the Gulf of Mexico, weakening to a tropical depression just south of Pensacola this weekend. 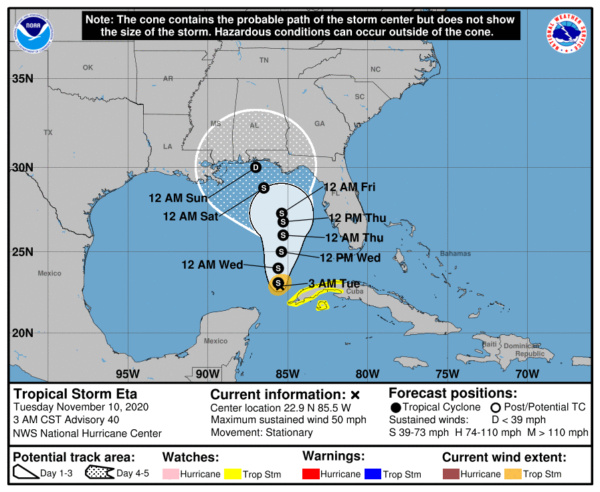 NHC forecaster Eric Blake writes in the morning discussion… “I have little confidence in the long-range track forecast due to its seeming dependence on the intensity, and the wide spread in the guidance.” Model spread remains wide, and know the forecast could change as the weekend gets closer. But, confidence is fairly high that the system will weaken late this week as it ingests dry air, and moves over cooler water in the northern Gulf. The main impact will be rain, but it remains to be seen where the axis of heavier rain will be on the Gulf Coast. Hopefully we can present a forecast with much better clarity tomorrow.

THETA: Subtropical Storm Theta formed yesterday in the middle of the Atlantic; it moving eastward, away from the U.S. 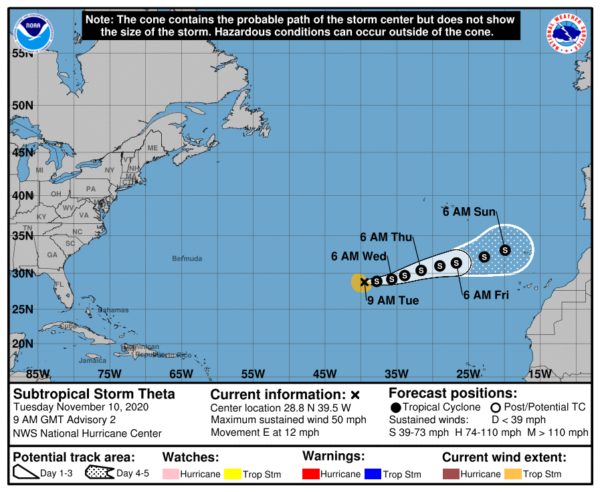 Theta is the 29th named storm of the season, a record for the Atlantic basin. However, 2005 still holds record for Atlantic hurricanes in a year with 15. 2020 currently in second place along with 2010 and 1969, at 12. A number of tropical storms this year were weak and short lived.

ELSEWHERE: A tropical wave located over the eastern Caribbean Sea is producing disorganized showers and thunderstorms. This wave is expected to move westward into more conducive environmental conditions, and a tropical depression could form late this week or this weekend when the wave reaches the central or western Caribbean Sea. If it becomes a tropical storm, the name will be “Iota”. It seems to be headed for Central America.

ON THIS DATE IN 2002: The “Veterans Day” tornado outbreak. A total of 88 tornadoes hit 17 states, including 12 tornadoes that killed 36 people in five states. This ranks as the third largest outbreak ever recorded in November. In Alabama, eleven tornadoes touched down, killing 12 people. Carbon Hill, in Walker County, was especially hard hit by an EF-3.