ANOTHER WARM AFTERNOON: Temperatures across Alabama are mostly in the mid 80s this afternoon with a partly sunny sky. Nothing on radar, and we will stay dry tonight… although low clouds will likely form again after midnight.

The weather won’t change much tomorrow… morning clouds will give way to a partly sunny afternoon with a high in the 82-85 degree range. A cold front will bring a band of showers into the state late tomorrow night into Friday morning; still looks like the best chance of rain will come from about midnight tomorrow night until noon Friday for North/Central Alabama. Some thunder is possible, but there is no risk of severe thunderstorms. And, rain amounts will be generally under 1/2 inch for most communities. A few showers could linger across South Alabama Friday afternoon.

THE ALABAMA WEEKEND: Saturday will be a very nice day statewide; with ample sunshine the high will be in the upper 70s… right at seasonal averages. Moisture will increase Sunday, and a few widely scattered showers are possible, but much of the day will be dry with intervals of sunshine along with a high around 80 degrees.

NEXT WEEK: A moist, unstable airmass will cover Alabama during the first half of the week… meaning the chance of scattered showers and thunderstorms Monday through Wednesday. They will be most active during the afternoon and evening hours, and while a few strong storms will be possible, major severe weather issues don’t look likely at the moment. The weather trends drier by Thursday and Friday… See the Weather Xtreme video for maps, graphics, and more details. 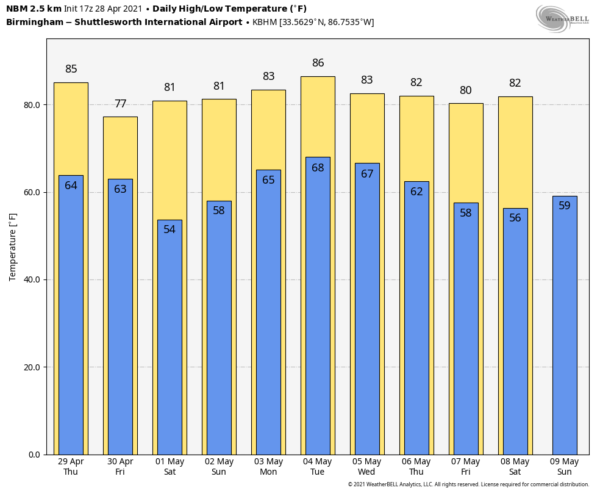 ON THIS DATE IN 2002: During the evening hours, a violent F4 tornado carved a 64-mile path across southeast Maryland. The La Plata, Maryland tornado was part of a larger severe weather outbreak that began in the mid-Mississippi Valley early on that day and spread across portions of the Ohio Valley and the Mid-Atlantic States. In Maryland, three deaths and 122 injuries were a direct result of the storm.

ON THIS DATE IN 2014: A total of 29 tornadoes touched down in Alabama. One of them was an EF-3 in Limestone County that killed two people in a trailer park. An EF-3 in Cullman County moved from near Welti to Berlin; it struck a chicken, obliterating several large metal chicken houses. 25,000 chickens were killed in this one location. Just north of Birmingham, an EF-1 tornado resulted in extensive damage to the Kimberly Church of God where it uplifted of most of the roof structure resulted in exterior wall collapse. A large metal industrial building had one of its walls blown out as well.