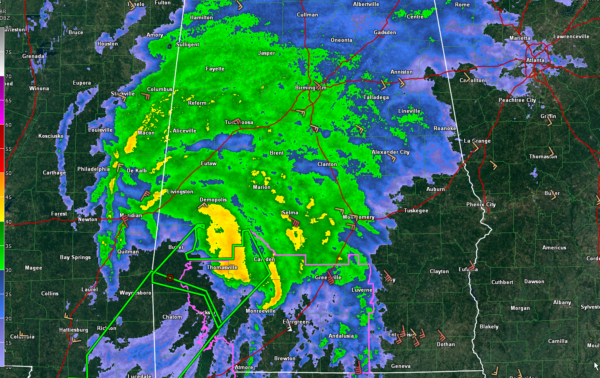 The center of Hurricane Zeta is over southern Choctaw and northern Washington Counties in Southwest Alabama at this hour, between Butler and Chatom.

That is about where we thought it would be.

The heaviest weather is moving through Thomasville at this hour.

The core, or the remnants of the eyewall will be moving through Clarke, southern Marengo, Butler, and into Perry and Dallas Counties over the next 90 minutes. There are not many reporting stations in the path of the core.

The center will likely pass near Marion a little after 1 a.m. and near Calera around 2 a.m. It should be near Talladega by 3 a.m. and into Georgia before 5 a.m.

Winds are becoming more gusty further north. Winds are gusting to near 20 mph at Calera and Bessemer and 28 mph at Tuscaloosa. Winds may gust to around 45-50 mph in Tuscaloosa and 60-70 in Birmingham.

Winds will gust to around 65 mph in Gadsden and Anniston around 3 a.m.

Make sure to check your home barometer if you have one. It will read about as low as you’ve ever seen it tonight. The central pressure in the hurricane is still 29.06 inches. The all-time record at Birmingham was set in Hurricane Ivan in 2004 with 987 millibars or 29.15. We won’t go that low, but we will be in the ballpark. The pressure at BHM right now is 29.75.

A large mass of moderate to heavy rain now covers the western half of Central Alabama.

Rainfall rates in the core are averaging 1-2 inches per hour. Outside of the core, rainfall rates are generally around one half inch per hour.

This is a night to treat the winds like they are capable of downing trees at your location if you are near the core and its path. Consider sleeping in the center of the home on the lowest floor. It might be a good idea to abandon mobile or manufactured homes for a friend or relative’s house if they are surrounded by large pine trees.