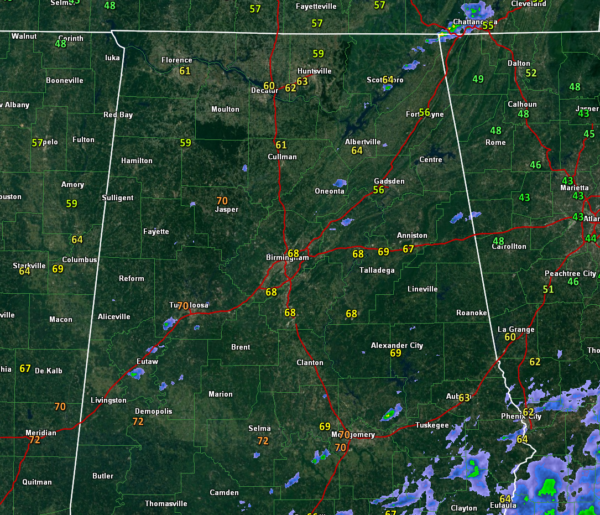 It appears that the trough will close off into an upper low to our northeast, and this will cause some precipitation to wrap around the low into the northeastern portions of Alabama overnight tonight and early Monday. This could fall in the form of light snow showers or light snow flurries between midnight and 9 a.m. The best chances are east of I-22 and north of I-20. Accumulations are not expected because temperatures are generally expected to be above freezing and there shouldn’t be any travel problems.

For now, clouds have thinned thanks to drier air aloft, allowing for a good bit of sunshine. Temperatures have warmed into the 60s everywhere but in Etowah and DeKalb Counties, where readings are still in the 50s. But the harbinger of change is already over Northwest Alabama in the form of a cold front. There is a breezy western wind, averaging 8-16 mph with gusts to near 25 mph. There will be a few light showers ahead of the southeastward moving cold front this afternoon. Temperatures will fall into the 40s over Northwest Alabama this afternoon, and into the I-59 Corridor by dark.

TONIGHT’S LOWS: By Monday morning, temperatures will be near freezing over the Tennessee Valley, with middle 30s in the I-20 Corridor, and upper 30s over South Central Alabama.

BLUSTERY MONDAY: Tomorrow will mostly cloudy, windy, and sharply colder conditions, with high temperatures struggling to get out of the 30s over the northern half of the state. Wind chills will be in the upper 20s and 30s. Lows will be in the 20s Monday night. The gusty northwesterly winds will continue until early Tuesday and there will be a few snow showers over eastern Tennessee

and western North Carolina. For now it appears they will stay out of Northeast Alabama.