SUMMER-LIKE AFTERNOON: Temperatures are in the 87-91 degree range across Alabama this afternoon with a good supply of sunshine. A disturbance will bring some clouds to the state late tonight, and we will mention a chance of isolated showers early tomorrow morning, generally between 3 and 8 a.m. Then, the sky becomes mostly sunny during the day with a high in the upper 80s. The best chance of scattered showers and storms tomorrow afternoon will be west of here, across Mississippi.

FRIDAY AND THE WEEKEND: We expect partly to mostly sunny days, fair nights, and only isolated showers. Odds of any one particular location seeing rain each day is 15-25 percent, and highs will be in the 80s. A strong upper ridge will deflect most of the major rain producing systems well to the west and north of Alabama.

NEXT WEEK: The ridge holds, and showers through the week will likely remain few and far between. Highs will be in the 88-92 degree range most days, and there is still no sign of any major, widespread rain event around here for the next seven to ten days. See the Weather Xtreme video for maps, graphics, and more details. 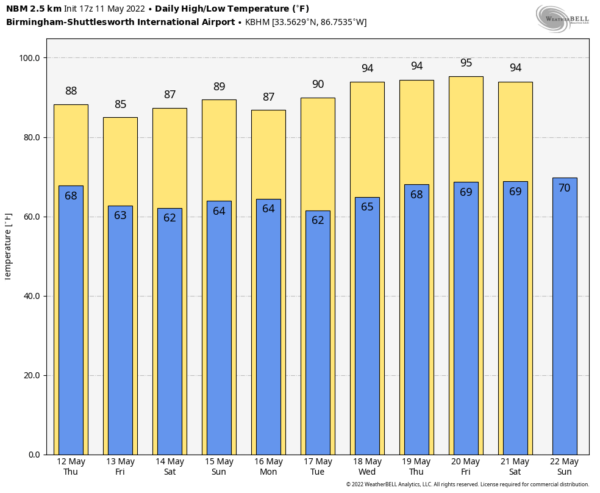 LUNAR ECLIPSE SUNDAY: A total lunar eclipse will occur Sunday night and it will be visible in eastern North America, including Alabama. Unlike a solar eclipse, no special viewing precautions are necessary. During totality between 10:29 and 11:54 p.m., the moon turns a dark orange or red, which is often referred to as a “blood moon.” As sunlight passes through our atmosphere, the green, blue and violet portion of the light spectrum is filtered out while yellow, orange and especially red bend around the earth and onto the moon’s surface giving it the reddish color.

ON THIS DATE IN 1953: A terrifying F5 tornado rips through downtown Waco, Texas, killing 114 people and injuring nearly 600 more. More than 850 homes, 600 businesses, and 2,000 cars are destroyed or severely damaged. Losses have been estimated at $41 million. The tornado is the deadliest in Texas history.

ON THIS DATE IN 2008: An EF-1 tornado moved through Heflin, in Cleburne County (East Alabama). Hundreds of trees were either snapped off or uprooted along the path. Several structures sustained damage and at least 6 of the structures were destroyed. At least 35 homes suffered varying degrees of damage. No injuries were reported.