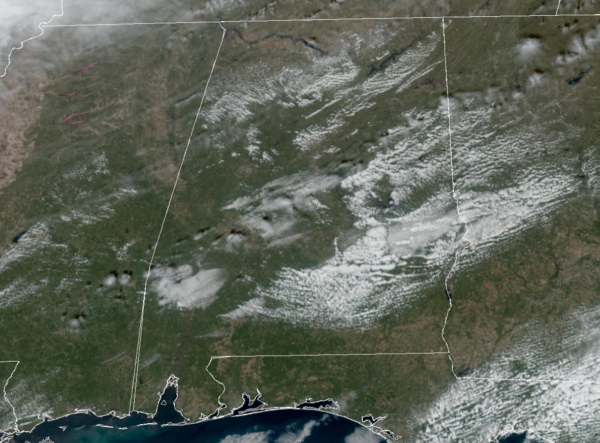 As we are heading to the midday hour on this fine Saturday, skies are partly cloudy to mostly clear across Central Alabama. Temperatures as of the 11:00 am roundup were in the mid-60s to the lower 70s. Gadsden was the cool spot at 65 degrees while Eufaula, Montgomery, and Troy were all tied as the warm spots at 72 degrees. Birmingham was at 70 degrees.

The rest of your Saturday will be really nice with mostly sunny skies and temperatures making it up into the mild range. Afternoon highs will range from the lower 70s in the north to the mid-70s in the south and southeast. Skies will become partly cloudy for the evening and overnight hours which will keep temperatures a little warmer, only dropping into the lower to mid-50s.

A much different story for your Sunday as clouds will begin to build throughout the day as a front will begin to sweep through the area late in the day. A few showers may roll into Central Alabama during the evening and late night hours but those chances will be very small. Afternoon highs will be in the upper 60s to the mid-70s from north to south. 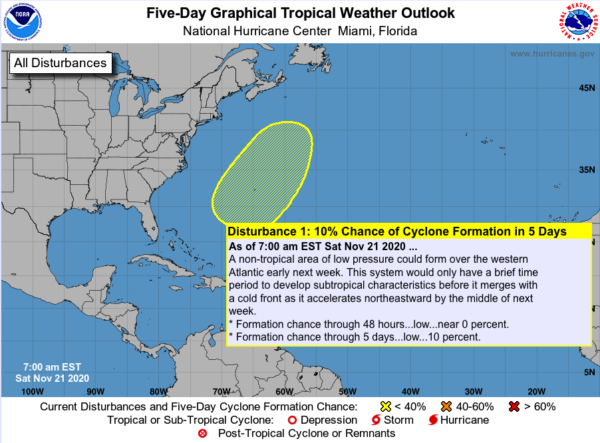 There is a small possibility that a non-tropical area of low pressure could form over the western Atlantic early next week. This system would only have a brief time period to develop subtropical characteristics before it merges with a cold front as it accelerates northeastward by the middle of next week. Formation chance through the next 120 hours is only 10%. The rest of the Atlantic Basin is rather quiet. Only nine more days remain in the Atlantic Hurricane Season for 2020, as it will come to an end on November 30th.