RAIN, MAYBE SOME SNOW ON THE WAY: Clouds are slowly increasing across Alabama this afternoon ahead of the next weather system to the west; temperatures are mostly in the mid 50s with a canopy of high cirrus clouds overhead. Clouds will thicken and lower tonight.

Tomorrow will be a cold, wet day with periods of rain and temperatures holding in the 40s; rain amounts of around 1/2 inch are likely. Then, tomorrow night, as a cold core upper low moves in, there is a chance rain could change to snow over about the northern quarter of the state due to dynamic cooling. The best chance of seeing snow flakes tomorrow night will be north of U.S. 278, or north of a line from Hamilton to Cullman to Gadsden.

Where heavier snow showers form under the cold core low, the grass could become white tomorrow night. But, for now, major accumulation or significant impact is not expected. But, these features can bring surprises, so watch for forecast updates during the day tomorrow. 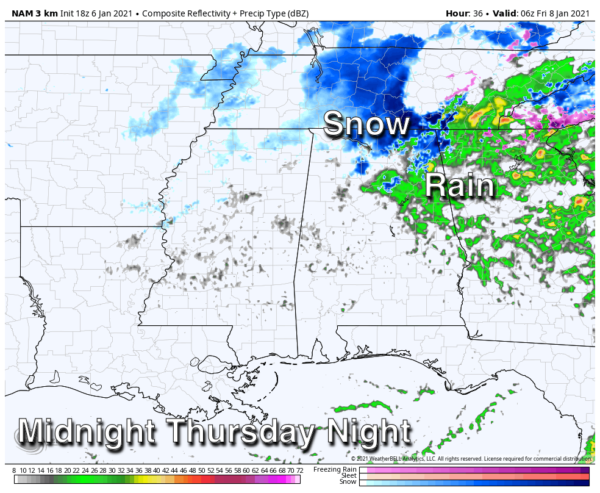 Friday will be cloudy and cold with a chance of snow flurries over North/Central Alabama; some communities north of Birmingham could hold in the 30s all day. Temperatures reach the 40s over the southern half of the state.

THE ALABAMA WEEKEND: The weekend will be cold and dry. Partly sunny Saturday and Sunday with highs in the 44-50 degree range; morning lows will be mostly in the mid to upper 20s.

MONDAY: The next system will bring precipitation to parts of Alabama Monday, but it remains too early to be specific. Deterministic output from the main global models are all over the board, but using the ensemble approach, the probably of snow greater than one inch over North Alabama remains in the 0-20 percent range. The system that will impact Alabama Monday is just moving into the Pacific coast today, and as it gets into the U.S. upper air network models will have a much better grasp on how it evolves over the next few days.

The rest of next week looks generally dry with a slow warming trend; highs return to the 50s over the latter half of the week. See the Weather Xtreme video for maps, graphics, and more details.

ON THIS DATE IN 2017: Much of Central Alabama received a mixed bag of wintry weather. This weather ranged from freezing rain to sleet to snow. The heaviest accumulations of sleet and snow occurred mainly near and south the Interstate 20 corridor. The highest amounts were observed in Tuscaloosa and Jefferson Counties, where up to 1.5 inches of sleet and snow fell.