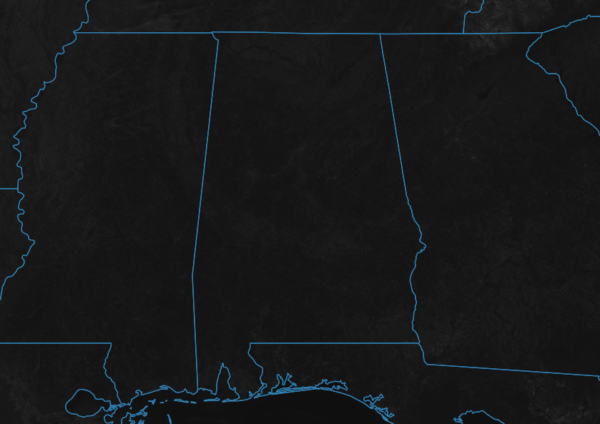 High pressure rules the weather over the Southeastern US today which has given us maximum sunshine and noon temperatures in the 40s across Central Alabama. Afternoon highs will eventually top out in the upper 40s to the lower 50s. For tonight, clear skies will allow the temperatures to drop below freezing, but not as cold as we saw this morning across the area. Lows will be in the mid to upper 20s.

Increasing high pressure moves to our east a little on Sunday which will only change our weather by making afternoon highs much warmer. We’ll make it into the mid to upper 50s across the area.

A Quiet Start to the Week, But Not That Bright
A weak cold front will move across the area on Monday which will bring clouds to the area, but at this point, the models are keeping moisture out of the mix, and we’ll stay dry throughout the day. Highs will be in the lower 50s to the mid-60s across the area from north to south.

The cold front makes into south Alabama on Tuesday but there will not be much change in the weather. Skies will stay mostly cloudy and afternoon highs will be in the lower 50s to the lower 60s.

A Soaker Moves In For Wednesday & Thursday
A strong low will be moving across the Great Lakes region and into Canada throughout the day on Wednesday that will be dragging another cold front into and across Central Alabama. This time, there will be plenty of moisture associated with this front, and there will be just enough instability for some thunder. A little early to call for the potential of severe storms, but with the better dynamics being so far away, that potential looks very, very small. Activity looks to move in starting in the late afternoon hours and continue for the remainder of the day. Highs before the front moves in will be in the upper 50s to the mid-60s.

Rain and storms will continue through the morning and into the early afternoon hours on Thursday, but those will begin to move out of the area by the mid to late afternoon through the evening hours. Cold air will move back in behind the front and rain, but temperatures will not be as cold as we have seen on Christmas night. We could see a few flurries on the backside of the system, but they will probably end up being less than what we saw on Christmas Eve. Highs will be in the mid-40s to the upper 50s.

48-hour rainfall totals that are being projected from the WPC show a good soaker for the area as the potential of 2-3 inches of rainfall could fall on Wednesday and Thursday.

Nice But Cool For New Year’s Day
Clouds will continue to decrease across the area on Friday with skies becoming mostly sunny early on. Temperatures will start off in the upper 20s to the mid-30s, but will eventually climb into the mid-40s to the lower 50s for afternoon highs.

Today In Weather History
1776: George Washington crossed the ice clogged Delaware River. He marched on Trenton in the midst of snow and sleet thus surprising and capturing many of the British garrison.

1778: The “Hessian Storm”, a severe blizzard, blasted the Northeast from Pennsylvania to New England. Snow drifts were reported as high as 16 feet in Rhode Island. The storm was named for troops occupying Rhode Island during the Revolutionary War.