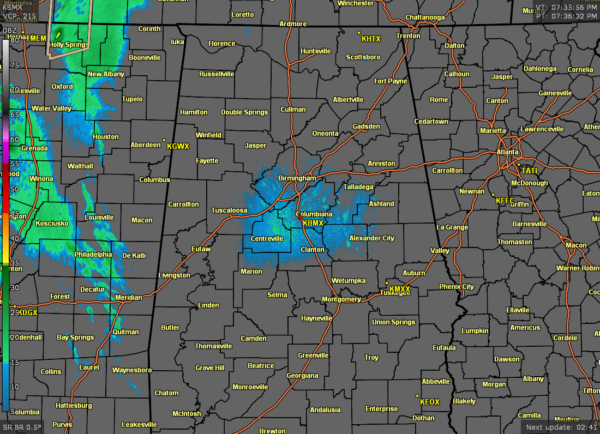 As of 7:33 pm, radar across Central Alabama remains rather quiet as all shower activity remains to our west in Mississippi. A few showers and maybe a rumble of thunder or two will be possible before your late local news, but the main window for the potential for stronger to severe storms will begin around 10 pm tonight and will most likely end around 12 pm Thursday. 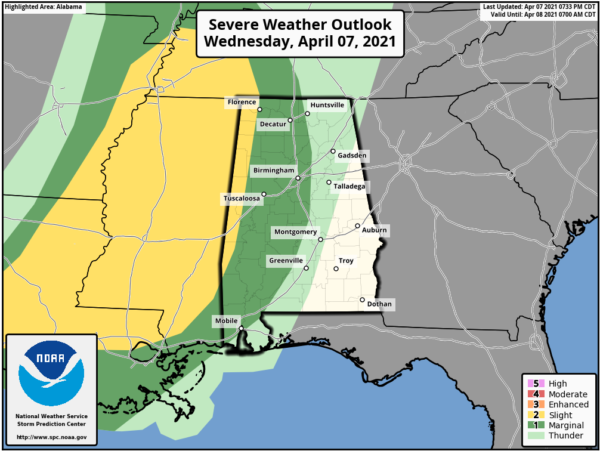 The latest SPC Day 1 Severe Weather Outlook update was just released and everyone west of a line from Huntsville to Columbiana to Mobile remains in a level 1/5 Marginal Risk for severe storms, while the extreme western portions of the area along the AL/MS state line remains in a level 2/5 Slight Risk. The main threat will be from isolated damaging wind gusts up to 60 mph, but a brief spin-up tornado or two cannot be ruled out. This outlook expires at 7 am Thursday. 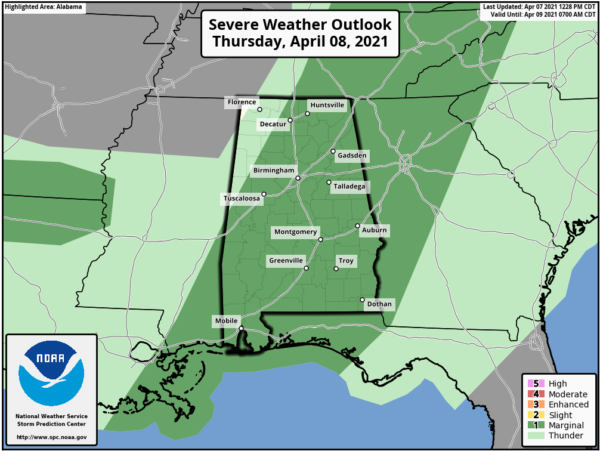 After 7 am Thursday, a level 1/5 Marginal Risk covers most of Central Alabama with the exception of the northwestern corner of the area.

If a watch is issued for any part of Central Alabama throughout the night and into the early morning hours, it will most likely be a tornado watch as there are just enough ingredients for the potential of a few tornadoes.

There is only one tornado warning in effect at this time, for parts of Ashley County in southeastern Arkansas and for Morehouse and Arkansas Parishes in Louisiana for a confirmed tornado near Galion and Bastrop, moving northeast at 45 mph. That was the only severe storm at this point. No watches are currently in effect.

Once again, timing will begin in the northwestern corner of Central Alabama around 10 pm tonight and will slowly progress east and southeastward across the area, and should come to an end around 12 pm Thursday.

We’ll keep you posted throughout the night. I’ll post updates and any alerts if they are issued while we are in the window for the potential of stronger to severe storms. Have those trusty items that alert you of severe weather and keep those phones charged.