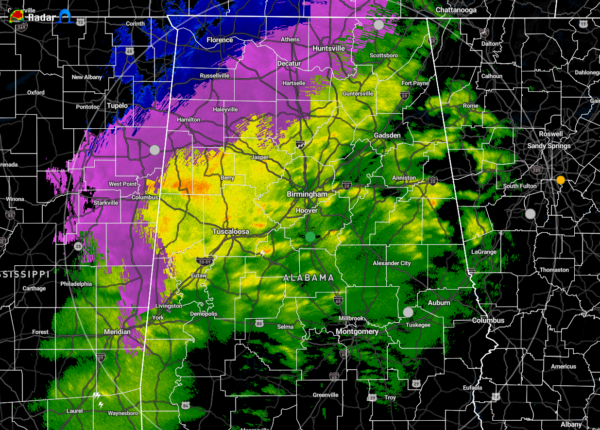 The low level jet across the area is starting to increase in speed which is allowing for some surface temperatures to start rising. This is allowing some locations in the northern parts of North Alabama to make a transition from a wintry mix or snow to all rain. While the radar cannot give us an exact result from the readings as the radar beam is well above the surface, but the algorithm is showing the potential of a mic of sleet and snow stretching westward along a rough line from Stevenson (Jackson Co.) to Cullman (Cullman Co.) to Sulligent (Lama Co.). East of that, nearly all of the precipitation is rain with the exception for a few sleet pellets mixed in just to the east of the line.

The latest temperature readings show none of the reporting stations in the 20s, now with only Muscle Shoals, Decatur, and Haleyville sitting below freezing at 30 degrees. Along and east of I-65, temperatures are at 32 degrees or higher. Eufaula has warmed to 56 in the extreme southeastern parts of Central Alabama. Birmingham is still sitting at 37 degrees.

There have been several crashes reported up in North Alabama potentially due to the wintry weather making roadways difficult to travel on, especially on those bridges and overpasses. Please stay off the roads if at all possible.

The winner so far has been Russellville (Franklin Co.) as they have received 5 inches of new snowfall so far today and tonight. Several locations have reported totals ranging from1-½ inches to 3-½ inches. Also, just saw a report of 4 inches in Hazel Green (Madison Co.). 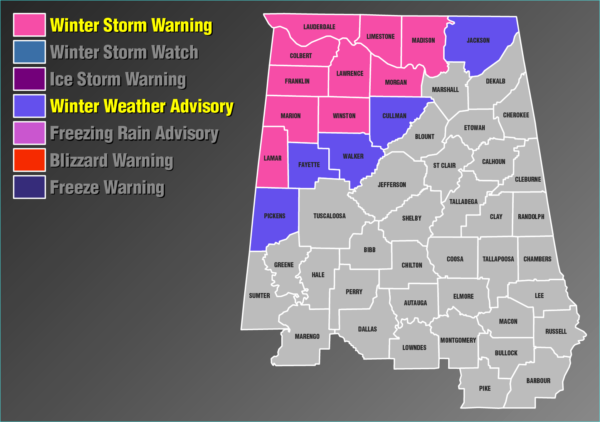 Widespread snowfall is occurring across northwest and north central Alabama this evening and in southern Middle Tennessee. A period of moderate to locally heavy snow will occur this evening, before precipitation transitions to sleet and freezing rain as it ends from west to east early Thursday morning. A Winter Storm Warning is in effect for all of northwest Alabama, north central Alabama and southern Middle Tennessee through 6 AM CST Thursday, and a Winter Weather Advisory is in effect for portions of the region not covered under the Winter Storm Warning.