As of 12:30 pm, we have a few fair-weather clouds out there, but much of Central Alabama is enjoying mainly clear skies at the halfway point of the midday hour. Temperatures as of the 12:00 pm roundup were in the lower 70s to right at 80 degrees across the area. Demopolis was right at 80 degrees as the warm spot while Gadsden was the cool spot at 73 degrees. Birmingham was at 77 degrees.

We’ll start off the day on Tuesday with partly cloudy skies, but those clouds will be out of here by the afternoon. Skies will end up sunny and afternoon highs will be in the lower to mid-80s across the area. 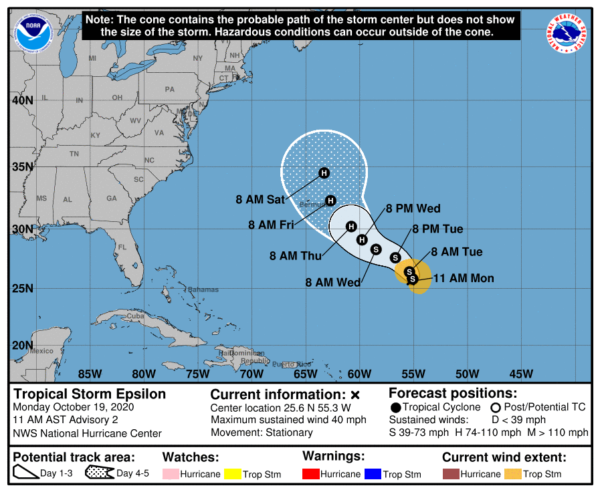 Tropical Storm Epsilon formed earlier this morning and currently has maximum sustained winds at 40 MPH. The center is currently stationary, but a slow west-northwestward to northwestward motion should begin on Tuesday, and this motion should continue through midweek. Gradual strengthening is forecast during the next 72 hours, and Epsilon is forecast to be at or near hurricane strength by early Thursday. Looks like Bermuda will have another close call with a hurricane as the current forecast has the center passing east of the island on Friday, but close enough to get heavy rains, gusty winds, and rough surf.

Flood Advisory for Etowah & St. Clair Counties Until 3:00 am : The Alabama Weather Blog

Flood Advisory for Etowah & St. Clair Counties Until 3:00 am : The Alabama Weather Blog