Showers continue over North Alabama at this hour with a lot of low clouds and a little drizzle over the rest of the area.

A tornado watch is in effect for much of southern and Southwest Louisiana until 9 p.m. There has been some discussion about whether a tornado watch will be needed later over southern Mississippi as well.

The surface low is north of Houston at this hour. A maritime warm front lies across southern Mississippi and Alabama, separating the dewpoints that are 65F are higher to the south from the slightly cooler and drier air to the north. The continental warm front is over Northwest Alabama, with dewpoints in the 40s to the northwest of it.

Heavy showers are moving northeastward across southern Mississippi. There is some lightning near the Mississippi River, but not much yet. There is a concentration of lightning in northeastern Louisiana near Monroe. All of this activity will push into southwestern Alabama this evening, but the instability will remain south of US-80 through midnight. There will be some elevated instability, so you may hear some thunder in Central Alabama during the evening. But severe weather will not be likely. 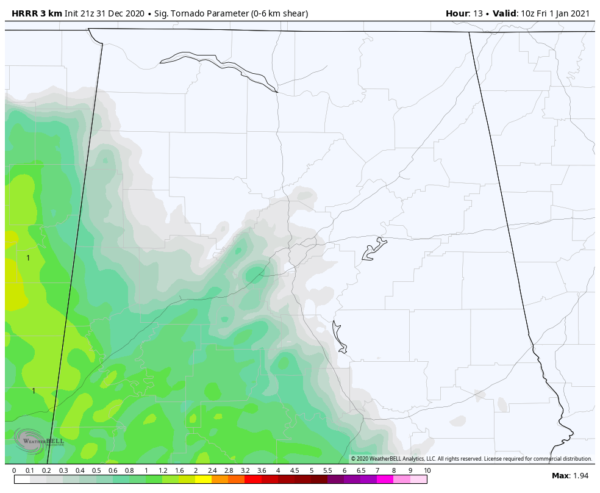 As the low moves north, a strong low-level jet will develop, and instability edge northward after midnight. Prefrontal thunderstorm activity will work into Central Alabama after midnight. By 2-3 a.m., there will be sufficient instability and shear for a threat of severe weather over West Central Alabama, with a low-end tornado threat south of Tuscaloosa and west of Montgomery. This threat will work eastward through sunrise with the main threat east of I-65 by 6-7 a.m. Areas in the I-85 Corridor will have to be alert to the tornado threat during the morning hours before noon.

We will be monitoring the mesoscale evolution of the system through the evening and will have frequent updates. Just make sure you have a way to receive warnings through the overnight hours that will wake you, just in case.
Here e