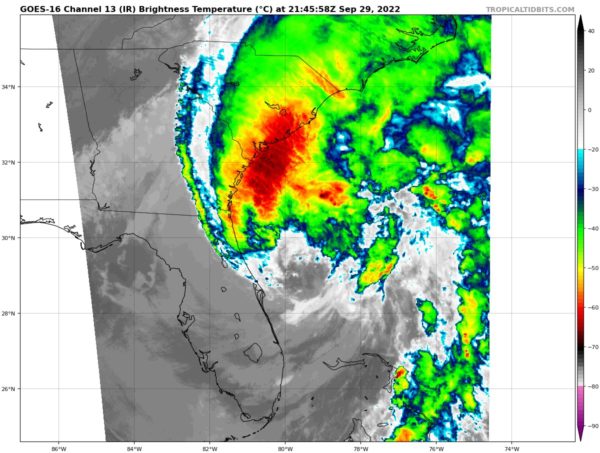 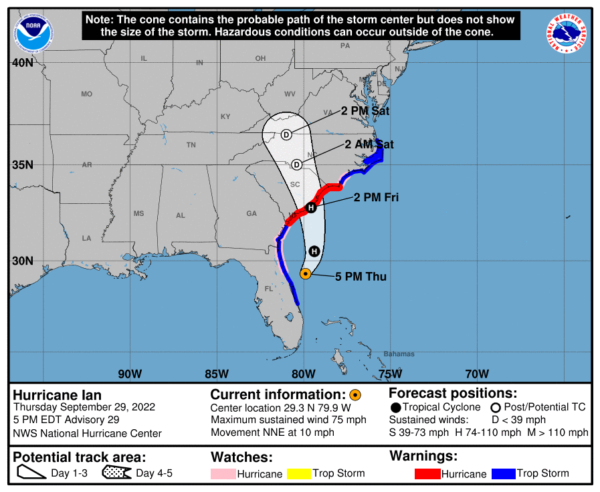 DISCUSSION AND OUTLOOK
———————-
At 500 PM EDT (2100 UTC), the center of Hurricane Ian was located near latitude 29.3 North, longitude 79.9 West. Ian is moving toward the north-northeast near 10 mph (17 km/h). A turn toward the north is expected tonight, followed by a turn toward the north-northwest with an increase in forward speed Friday night. On the forecast track, Ian will approach the coast of South Carolina on Friday. The center will move farther inland across the Carolinas Friday night and Saturday.

Maximum sustained winds have increased to near 75 mph (120 km/h) with higher gusts. Ian could slightly strengthen before landfall tomorrow, and is forecast to rapidly weaken over the southeastern United States late Friday into Saturday. 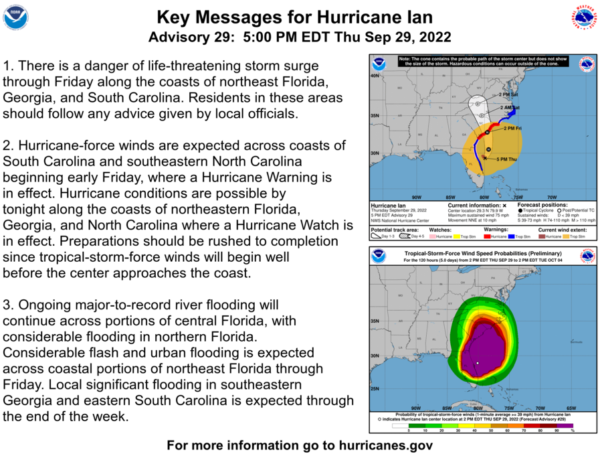 HAZARDS AFFECTING LAND
———————-
STORM SURGE: The combination of storm surge and the tide will cause normally dry areas near the coast to be flooded by rising waters moving inland from the shoreline. The water could reach the following heights above ground somewhere in the indicated areas if the peak surge occurs at the time of high tide…

The deepest water will occur along the immediate coast near and to the right of the center, where the surge will be accompanied by large waves. Surge-related flooding depends on the relative timing of the surge and the tidal cycle, and can vary greatly over short distances. For information specific to your area, please see products issued by your local National Weather Service forecast office.

Tropical storm conditions are now occurring in parts of the warning area on the east coasts of Florida and should spread northward along the Georgia and North Carolina coasts today through Friday. Hurricane conditions are possible within the Hurricane Watch area in northeastern Florida and Georgia today into Friday, and in the watch area in North Carolina on Friday morning.

TORNADOES: A few tornadoes will be possible Friday across the coastal Carolinas and southeast Virginia.

SURF: Swells generated by Ian are affecting the northern coast of Cuba, the northeastern coast of the Yucatán peninsula, Florida and Georgia. Swells will increase along the coasts of South Carolina and North Carolina. These swells are likely to cause life-threatening surf and rip current conditions. Please consult products from your local weather office.