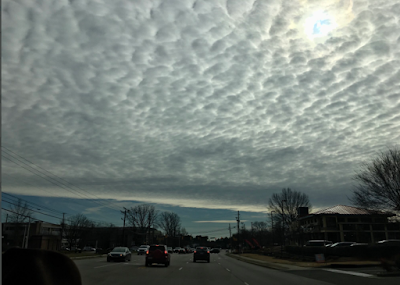 Just a blanket of clouds, rippled and wintry.

It’s been a while since I blogged and I keep saying I will blog more often, but it’s the “off season” for me and not much going on tropically speaking and winter wise we are in a mild sort of mode of “really cold days” “not so cold days” “warming up” and then some “really cold days” starting the cycle over again. Weather is by nature cyclical and it has it’s ups and downs be it winter or deep in the hurricane season. As Cranky online would often say “rinse and repeat” and so far 2021 has been very “rinse and repeat” indeed.

I don’t want to write “coming this 2021 Hurricane Season” blogs in January, as long time followers of my blog know how much I dislike pronouncements on what the season will be like in March and April so I definitely am not going to go there in Mid January. The news cycle has been so heavy the last few weeks and I’ve seen many leave Twitter and other social media platforms, I’m guessing many will rejoin with another name possibly or not – don’t know so can’t say and that’s how I feel about the 2021 Hurricane Season it’s too soon to say. I’m just doing my thing and that’s watching those I respect, enjoying pictures of the weather related kind and following the news with one eye closed and the other squinting. I’m that person who turns off the local news when they do a horrid story on some child dying or drowning or a car going off the …. (don’t know I turn it off) as I really am a bit fragile on subjects that upset me considering I have a very good imagination.

That said……….I cannot imagine exactly how this hurricane season will be as it’s so far away and there are so many intangibles we cannot imagine yet or conjure up in a crystal ball currently so if I said anything it would be taking a stab in the dark of winter. But I have read many colleagues thoughts and they all basically the same in that the 2021 Hurricane Season will be very similar to the overly active hurricane season of 2020. I can see that as a strong possibility and as far as patterns go…. Louisiana is still getting slammed by winter systems the way they were getting tropical systems several months back. Let’s hope that pattern modifies somewhat before May and June. Note this is the main point of my blog today, similar back to back seasons are different in the details and we all know the devil is always in the details.

So let’s start this discussion with the 1995 and 1996 Hurricane Seasons that were both extremely busy, yet different in many ways. Links are below and most of the images here are from Wikipedia. They look very similar when you click on the images and notice how busy the Atlantic was all the way from Africa to a traffic jam as the tracks approach the East Coast and the Caribbean. But when you look close up at the many tracks you see 1995 drew pretty hearts off the coast of the Carolinas and then curved gracefully away, whereas storm chasers practically took up residence in Wilmington, North Carolina the following year in 1996 as hurricane after hurricane took aim on that part of the coastline. Tell someone in Wilmington or Morehead North Carolina that 1995 and 1996 were the same and they will tell you the many ways that 1996 was way worst and 1995 was busy but not the same. Those in Florida, especially the Big Bend area, will tell you 1995 was way worse than 1996. The details are about the locations, the intensity, the multiple hits as Hurricane Seasons play out in real time. 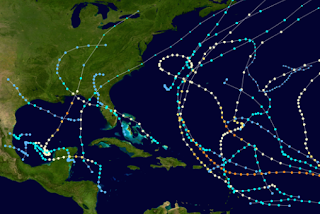 Lots of landfalls along the NC coastline. 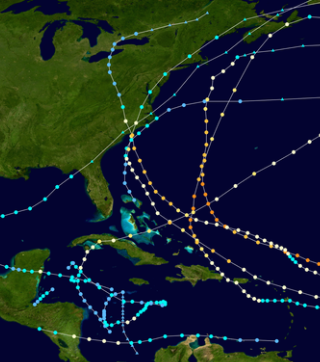 I was online in 1996 often and watched as one hurricane after another passed Miami by and stayed away from Florida drawing beelines to the same spot in North Carolina on my old school hurricane tracking maps. In those days I often chased storms in the South Florida area, my time being limited by being a young mother and money was short and time was an even more valuable commodity than money so 1996 for a Miami girl was more of “that happened” more than “oh my gosh we got hit nonstop” the way we did years later in 2004 and 2005. Now, 2005 was very similar to 2004 but 2004 slammed Florida so often the jokes were endless, yet 2005 brought the eye of hurricanes right over my house where we gathered in the big circular driveway in lawn chairs enjoying the moment of calm, blue sky and being in the eye. Again it’s all perspective in retrospect; both 2004 and 2005 were busy, landmark hurricanes but as different as 1995 and 1996. A good link at the bottom to read on the 2004 Hurricane Season. 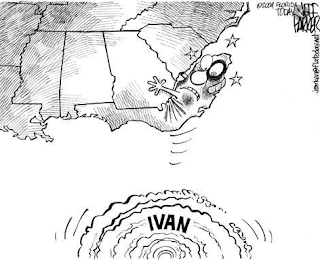 So beware reading too much into early discussion that does have value, but remember how fast things can change. My husband showed me in the newspaper the other day (yes he still reads the paper) that on this date in 2020 the Chinese government felt there was little danger of transmission of the disease from animals to human… I believe it said “low” chance but then everything changed.  Not a political comment here, a historical one as it was one year ago and the world changed. Hurricane Seasons can change based on many reasons be it early in the season, mid season or in the end. The El Nino of all El Ninos came on FAST in 1997 and all the predictions for a busy season evaporated like a puddle on the pavement in Phoenix when it’s 105 degrees outside. A strong volcano in the Caribbean can be a game changer in some ways, and yes that has happened also. Stuff happens…. The pattern is there……

How the pattern varies makes all the difference regarding landfalls.

Are we in La Nina still or flipping to Neutral and where will we be in August 2021?

Yes, the water may be cool somewhere but it will warm up in August when it needs to be hot.

Both 1995 and 1996 began early and ended late, but there were differences and those are the differences that matter not merely saying “they were both very busy seasons” because Bertha looked like it was gonna take aim at South Florida and then it ran off towards North Carolina, the first of several landfalls that made 1996 an epic year to remember in Hurricane History for North Carolina. And here I am now in North Carolina and Wilmington is one of my places to run off to and hang out in during the summer or any time of year. Go figure.

So stick around, we have a lot more winter to go before we really need to talk about the Hurricane Season of 2021. In South Florida they have had many cool days and fronts that made it all the way down into the Florida Keys they are really enjoying this winter as some winters pass them by completely. Those suffering from the 2020 Hurricane Season are still suffering, unless they are independently wealthy and even then waiting for work to continue rebuilding their lives torn apart by 2020. In New York people are leaving in large numbers (not a political comment, parts of my family are in Miami Real Estate that’s popping hot like biscuits just out of the oven waiting for butter) but will they keep streaming to Florida if it gets slammed by hurricanes ? And those leaving California for Texas could pack up and go back to the land of regulations and earthquakes if Texas gets slammed by hurricanes this summer and fall. So many variables…. so stay tuned.

Personally I love Winter Weather and I love North Carolina in the winter. I’m looking forward to spending many summer days in South Florida and hopefully the Plague will ease up enough for me to feel comfortable traveling again!  But seriously look at that sky from Raleigh yesterday above and know the air was crisp and clean and it was a beautiful “winter” day in Raleigh where real winter weather rarely happens but there’s a chance………… a chance……..at the end of the month as we cruise into February. I’ll talk more about that chance later this week – – – if the models keep delivering promises.

Ps… To everything there is a season, enjoy the fruits and vegetables of that season as well as the fashion of boots in January and Flip Flops in July and Lattes when it’s hot and Frappes when it’s cold though it has to be really hot for me to have a Latte … just saying. Pistachio Frappes are oh my goodness! Links below for the 1995 and 1996 Hurricane Seasons, similar but different. You can Google 1995, 1996, 2005 and 2005 Hurricane Seasons yourselves and see how similar and how different they were in their own unique way. And while there check out 1953, 1954 and 1955… similar but different, as always.