Disclaimer:  This site is not affiliated with the National Hurricane Center, Hurricane Hunters, Storm Prediction Center, or National Weather Service.  ALL forecasts herein are the result of my analysis, and I am solely responsible for the content.  As ALWAYS, follow the National Hurricane Center, National Weather Service, and your local Emergency Management officials for emergency decisions.  In addition, this is strictly a FORECAST OFFICE.  I CANNOT make decisions regarding travel plans, etc.  My purpose, is to provide you the information, based solely on information I analyze, and the accuracy of the information at hand of the time of analysis, so you may make informed decisions.
(T. F. “Storm” Walsh)

For those who have donated to my site, your help has been greatly appreciated.  If you are not aware, donations to my site help pay for subscriptions to sites I use, which provide all the models and information used in my forecasts.  Without these sites, I’m pretty much left in the dark.  The F5 Data maps I post as well for severe weather, is another out of pocket expense (monthly subscription).  Updates to software (weather related), are also out of pocket to me. Please keep in mind, even when the hurricane season ends, I have to keep up on these site subscriptions for severe weather and winter weather.  In all, I put out $68 a month to provide you, what I hope are accurate forecasts. To donate, please click the DONATE button to the right side of the page, or on the graphic of the dog.  Any help you provide is immensely appreciated!  Without your help, I may not be able to continue paying the monthly subscription charges for access to all of the information I use in my forecasts
DONATIONS NEEDED AND APPRECIATED 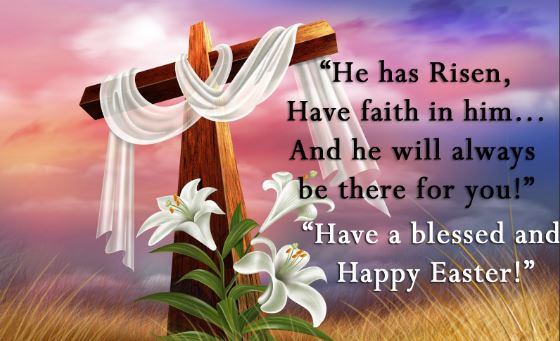 Greetings to everyone!
Please be aware, even though I do not post every night, rest assured I am continuously monitoring various areas for any significant weather.  I will be taking Sundays off (family time), unless we have active systems that may be posing a threat (i.e. Tropical, Winter Weather, Coastal Storms, etc.).

I performed my third analysis today of the most current forecast information from various global and climate models.  Based on the parameters analyzed, the 2021 Atlantic Hurricane Season will most likely become another “active” season.  As always, this forecast is subject to change, as forecast models continue to update each month, between now and June 01.  However, with the current available information, it looks like another busy season.  Although analysis of forecast Oceanic Nino Values indicate slightly warmer anomalies, the anomalies are forecast to remain negative, and currently indicate neutral conditions  with most climate modeling concurring.  After comparing these values to past trends in the current ONI chart, I chose the three best analog years in the chart, based on seasonal trend, as the averaged ONI temperatures from modeling did not match any years in the ONI chart.  The storm numbers averaged out to 14, 7, and 3.  However, I decided to incorporate a something little different into the forecast.  Based on the premise that ENSO conditions are forecast to be mainly neutral (no warm or cold bias), I researched years of “neutral” ENSO conditions since 1995 (when the AMO went to the warm phase), and figured those values into this update.  I am increasing my totals based on this, as well as some of the more “favorable” forecast conditions such as a neutral to negative IOD by the peak of the season, as well as the forecast of below average wind shear for most of the upcoming season.

The following is my PRE-SEASON outlook forecast for the upcoming 2021 Atlantic Hurricane Season:

Based on analysis of current forecast ENSO plumes from global and climate modeling, the models seem to indicate ENSO NEUTRAL to ENSO NEUTRAL COLD BIAS. As a rule of thumb, the cooler NINO 3.4 becomes, the more favorable conditions over the Atlantic become for storm development.  The following are ENSO plume forecast charts analyzed today:
NCEP CFSv2 ENSO PLUMES FORECAST 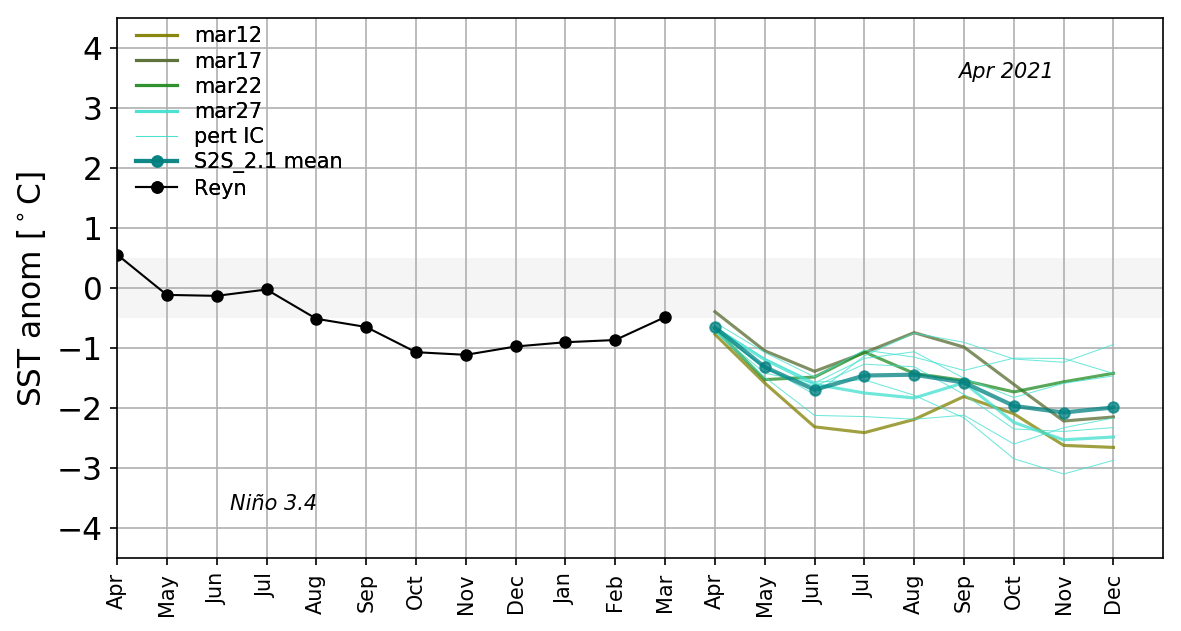 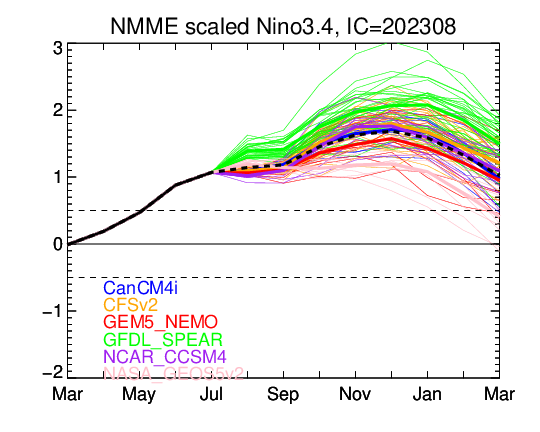 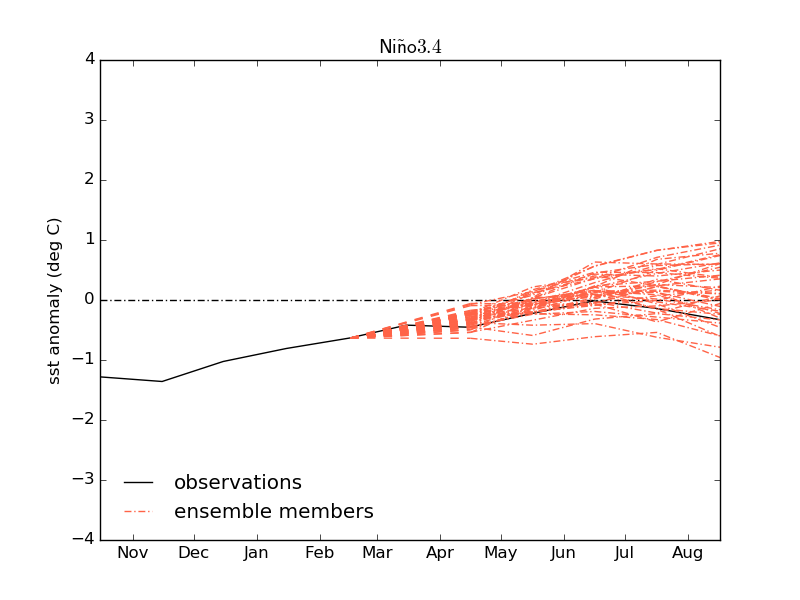 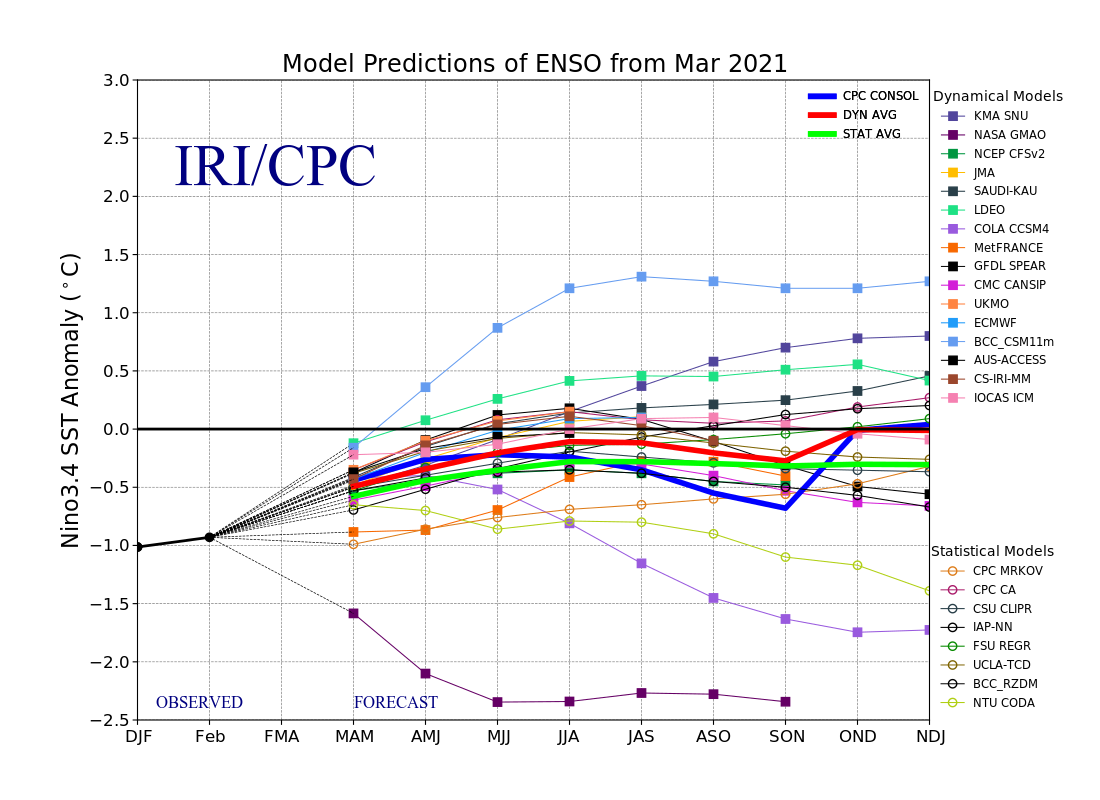 Having analyzed the following SST anomaly maps, the SST anomaly pattern looks very similar to the pattern of 2020, in which warmer SST anomalies were north of 20N, and closer to the U.S.  This could imply the same development pattern in which we had numerous close in development type systems.  The SST anomalies forecast maps are from the CFSv2 and NMME climate models.  The NMME maps are linked to show the various ensemble members.
CFSv2 SST ANOMALIES 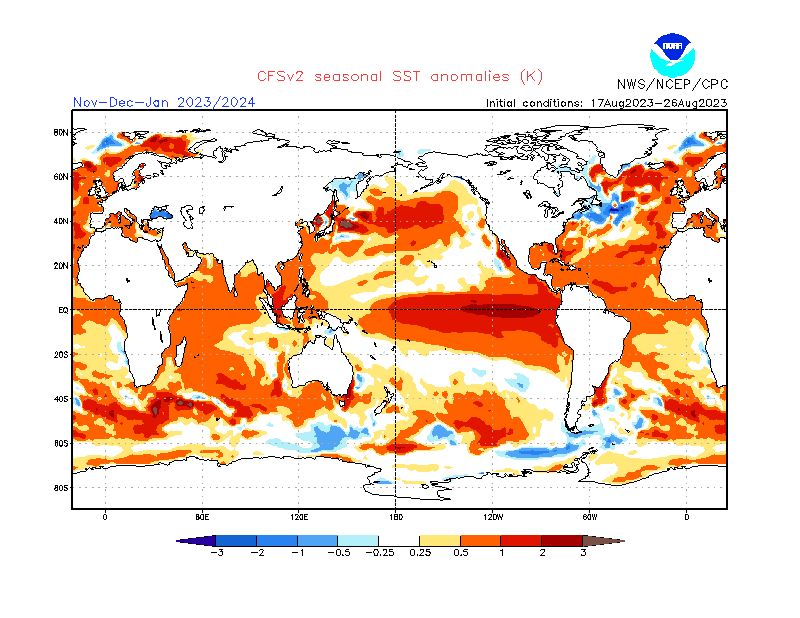 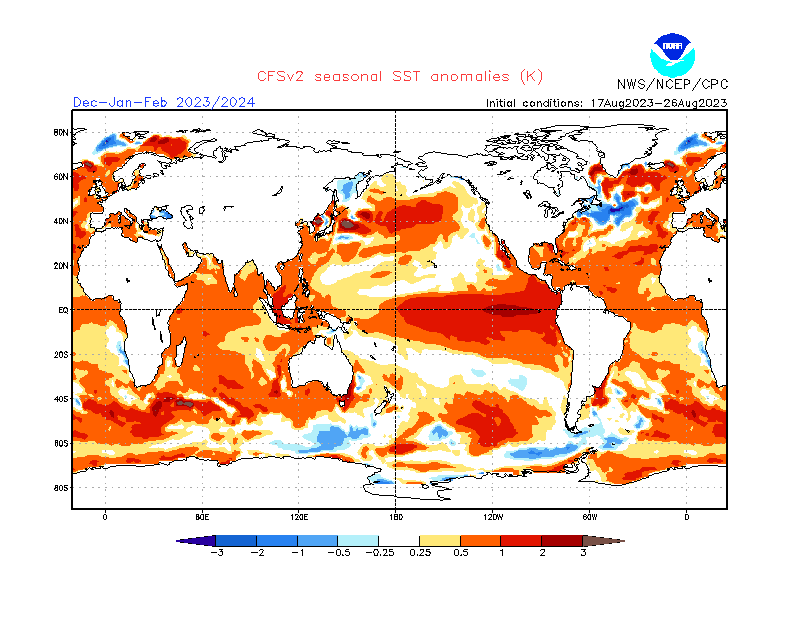 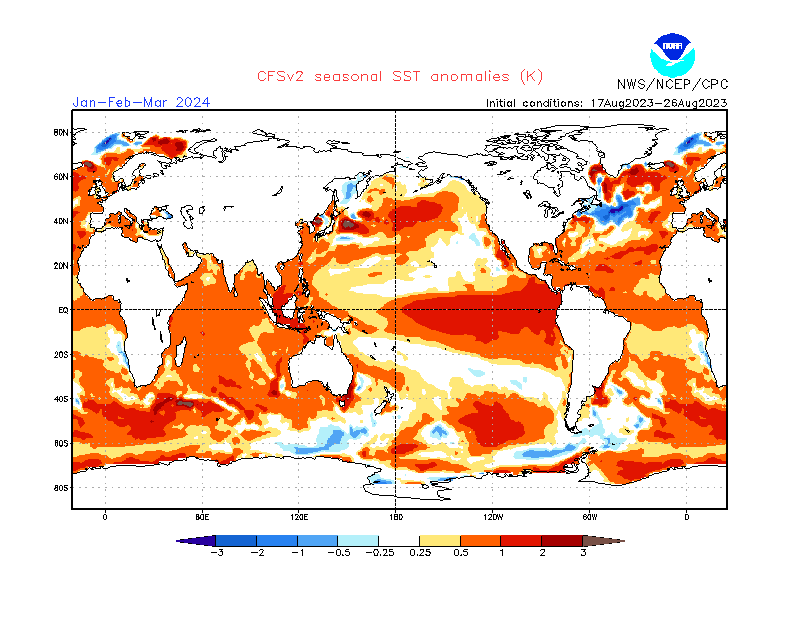 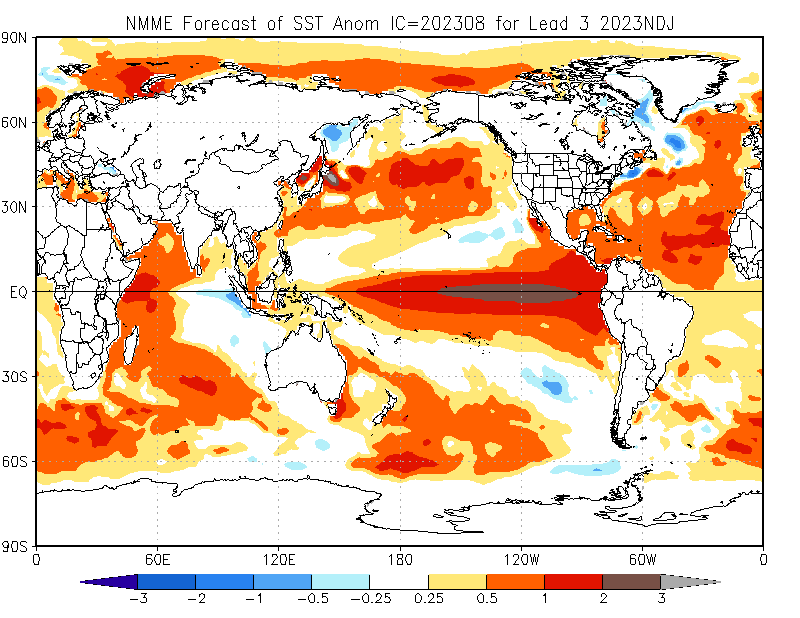 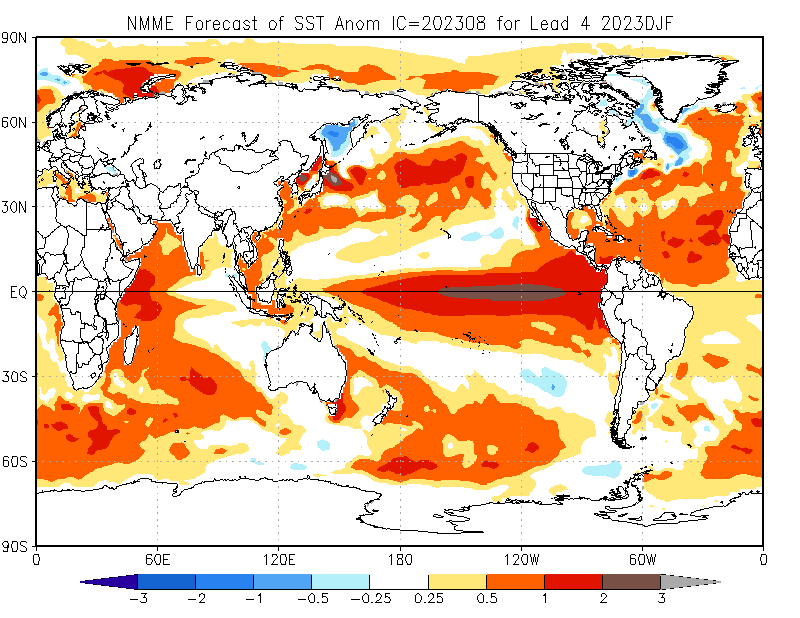 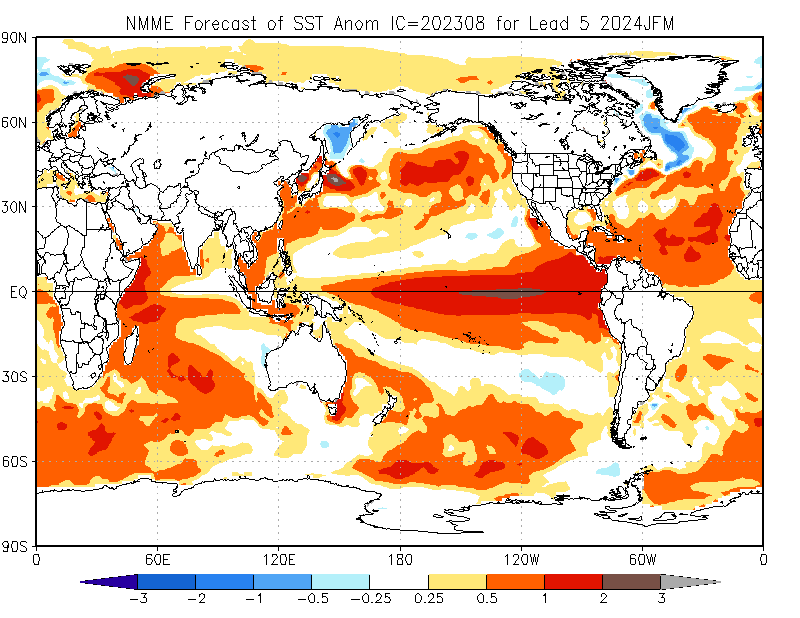 The following is a good article from FSU regarding hurricane development and landfalls during the different phases of ENSO:
https://climatecenter.fsu.edu/topics/tropical-weather/regional-effects-of-enso-on-us-hurricane-landfalls#Tropical%20Cyclone%20Steering

It was once again noted that most of the models indicate the Gulf of Guinea to turn neutral to cooler.  This was forecast to occur in the 2020 season, however didn’t really come to fruition.  SHOULD this occur however, and cooling becomes significant, a shift northward in the ITCZ/Monsoon Trough could occur, possibly bringing greater rainfall to the Sahel region, which would aid in a reduction in the SAL.

Another item in the forecast, regarding Sea Surface Temperature Anomalies, is the IOD (Indian Ocean Dipole).  The updated forecast from the climate modeling tends to show the IOD staying fairly steady, up until MAY.  The 3 climate models which track this, indicate the IOD to go a neutral to negative phase, with a good majority of the ensemble members heading toward a strong negative phase.  During a positive IOD phase, you’ll notice the “Walker” circulation allowing for an increase in convection and rain near east Africa.  The rising air causes lower pressure and precipitation at the ocean surface.  You’ll see on the eastern side of the circulation, air sinks to the surface, causing higher pressure at the surface and drier conditions.  This exact flow happens on the western portion of the circulation near the African east coast.  The air rises, and as it reaches the upper portion of the atmosphere, it cools, then begins to sink (higher pressure).  As this air in the upper atmosphere sinks, it compresses and heats, drying out the air, hence the “lack” of convection for easterly waves over central Africa.  The positive IOD phase also acts as an El Nino affect over Africa and portion of the Atlantic ocean by inducing wind shear.  A negative IOD phase has the opposite effect.  As the air “sinks” over the western Indian Ocean, it spreads out over the surface, and across eastern Africa.  The pattern then continues with the air “rising” over central Africa, allowing for, or aiding in the formation of convection.
IOD POSITIVE PHASE

The following is an excerpt from an abstract written by Kimberly M. Wood (et.al.), referencing the IOD:

The 2019 Atlantic hurricane season exhibited above‐average Accumulated Cyclone Energy—60% of which was produced by Hurricanes Dorian and Lorenzo. Most tropical cyclone (TC) activity was concentrated in a ~6‐week period from late August to early October. During the early part of the season, relatively TC‐unfavorable conditions persisted in the main development region (MDR). The MDR environment became largely favorable in September, followed by an abrupt shift back to less conducive conditions in October coincident with a strongly positive Indian Ocean Dipole (IOD). The IOD produced an El Niño‐like teleconnection pattern observed through 200‐hPa velocity potential anomalies. In the subtropical Atlantic, above‐average sea surface temperatures persisted for much of the season, which may have contributed to increased activity at higher latitudes. Given the neutral El Niño‐Southern Oscillation conditions during the 2019 hurricane season, our study highlights the need for further analysis of IOD impacts on Atlantic TC activity.

IF the climate modeling is correct, and the IOD goes neutral to negative as shown, there could be an increase in tropical wave activity during the Cape Verde season, not unlike what happened last season.
IOD FORECAST FROM  BOM 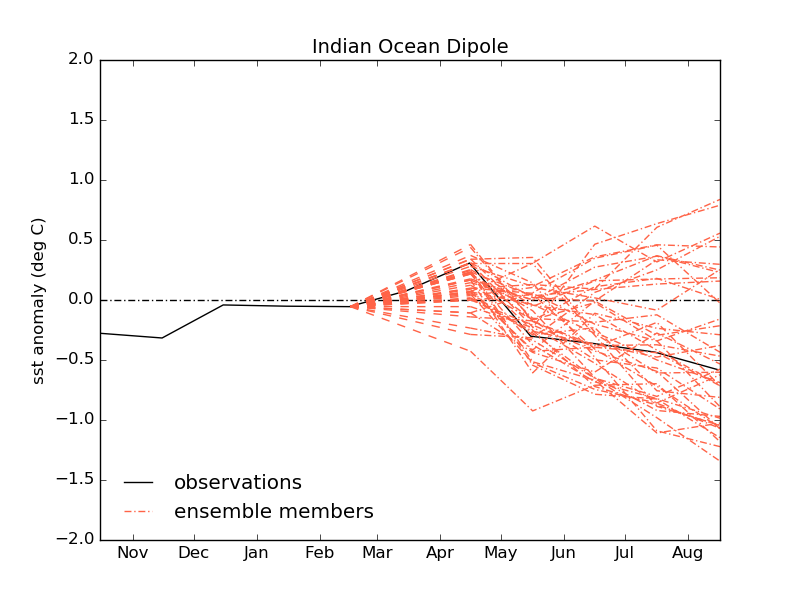 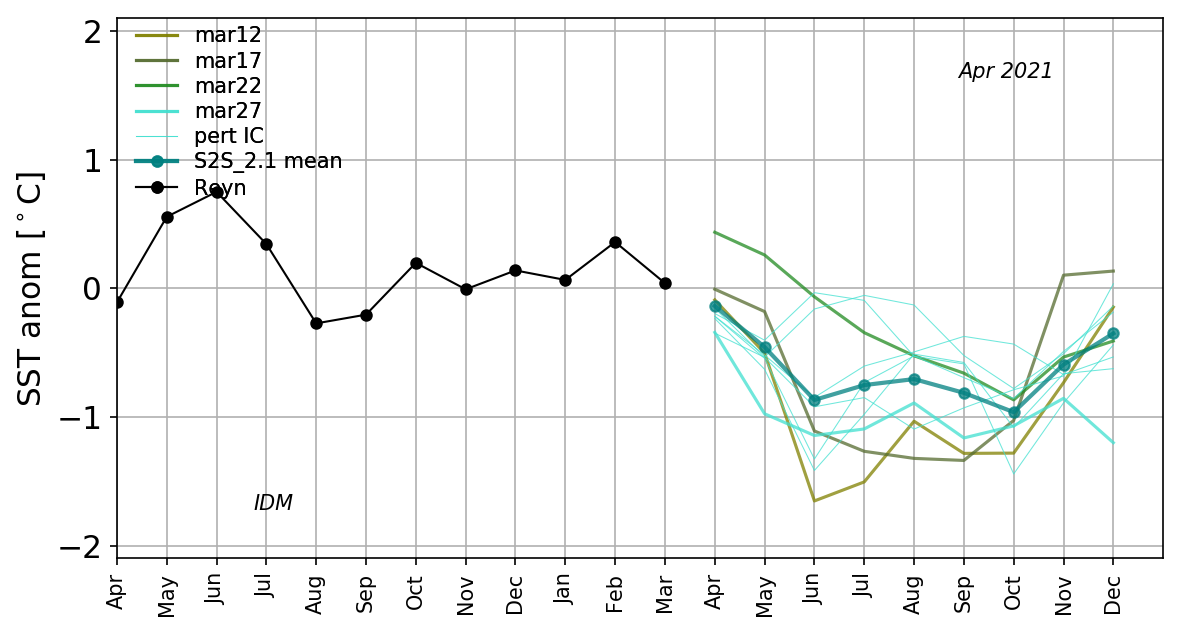 With the forecast of a neutral ENSO, the CFSv2 is showing well below normal wind shear over the Atlantic basin, which is another enhancing factor for the hurricane season.
CFSv2 CURRENT SEASONAL u200 – u850 (WIND SHEAR) FORECAST 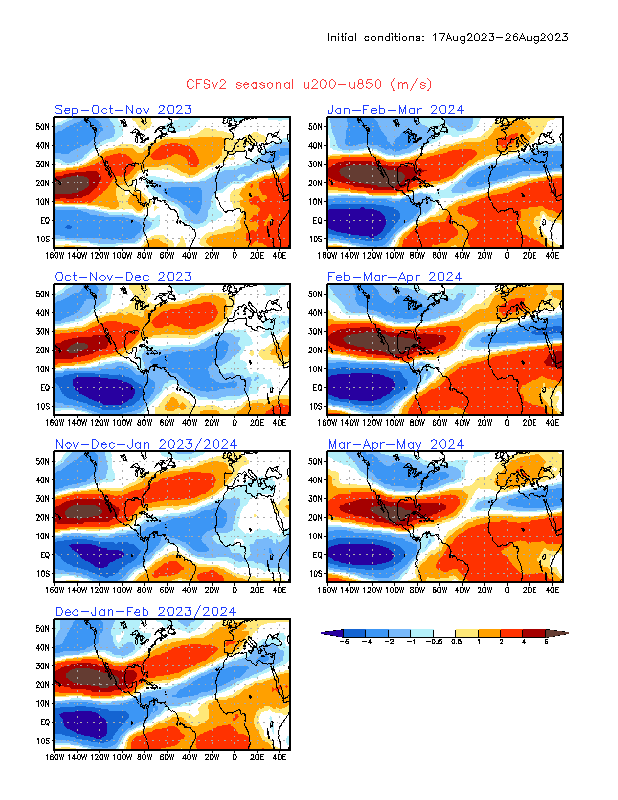 You may direct any questions this season by contacting me personally, ANYTIME, at: twalsh22000@yahoo.com

Have a blessed weekend!

I am a Tropical Forecast meteorologist, providing hurricane forecasts during the Atlantic Hurricane Season. I retired from the U.S. Coast Guard in July of 2001. Meteorology became my passion in high school, and I have continued my educational background in meteorology since 1996, when I undertook the study of Tropical Meteorology. While working toward my degree, I had to unexpectedly withdraw from college due to my oldest sons medical reasons. I do however, meet the educational criteria of the AMS to be recognized as a meteorologist. Studies include, but are not limited to the Navy Aerographers Mate course, Naval METOC meteorology course, Meteorology 2010 Sophomore level course while attending St. Petersburg College, Clearwater, FL., Basic Forecasting course for operational meteorologists from Rapid WX, meteorology institute, a four month meteorological internship, and extensive research on numerous meteorological topics such as the MJO, NAO, satellite imagery interpretation, etc.

I have been forecasting Tropical Weather (Tropical Storms and Hurricanes) since 1996, with my main client being three different Coast Guard Commands.