Overall, the year 2020 featured temperatures that averaged 0.4 degrees above average, identical to 2019. However it came about with fewer extremes than the previous year. Six months averaged above normal temperatures and six below, though the warm months had greater departures from normal than the cool months, thus resulting in an above average year.

Precipitation-wise, the year started wet, but spring and early summer drought reversed the early excess. By December 29, precipitation was just slightly below normal, however three inches of rain to end the year resulted in a departure of +2 inches.

The year started warm and wet with temperatures that averaged over five degrees above normal and precipitation totaling almost 2.5 inches above normal. The patter favored severe weather in the pre-dawn hours on the 11th as a squall line moved through, dropping six tornadoes in the Memphis metro, the strongest an EF-2 that passed between Hernando and Olive Branch, MS. About 40,000 MLGW customers lost power due to strong wind. There were also a few snowflakes around the area on the 20th, but none recorded at Memphis International Airport. February continued the wet trend, finishing nearly 2 inches above average, but temperatures were closer to normal. There was one snow event, with up to an inch of snow falling on the night of the 6th-7th and flurries again on the 20th. Thunderstorms also occurred on five days, but there was no severe weather.

The first quarter of 2020 ended in March the way it began – warm and wet. Temperatures averaged 4.5 degrees above normal and precipitation was more than 4 inches above normal as spring set in. From the 9th to the 24th, measurable rain occurred on 14 of the 16 days, and 20 days for the month reported rain, tying the record set in 1897. Severe weather occurred on the 28th with trees down in multiple locations across Shelby County. For the first three months of 2020, rain fell on 51 days, just missing the record of 52 set way back in 1882.


Heading into April, the weather turned cooler with temperatures averaging over 2.5 degrees below normal. It was still wet, but very near the average of 5.5 inches of rain. However, almost half of that occurred on a single day – April 12 – when severe wind damaged some trees and power lines. Severe weather also occurred on the 8th  and 28th/29th, all of which were wind related. Only two April days reached 80 degrees, one less than March! May typically sees much warmer temperatures as summer approaches, and though it did warm up, Memphis still averaged more than 2 degrees below normal, with only one day that eclipsed 90 degrees. In fact, there were some late-season lows in the 40s during the second week of the month! While severe weather was limited, a destructive event on the 22nd produced widespread damaging wind in Crittenden and Shelby Counties with over 52,000 MLGW customers without power as Memorial Day weekend started.

Meteorological summer began in June with cooler than average temperatures for the third consecutive month, though not be a lot. It was also a bit drier than average, though severe weather occurred a couple of times in the first week of the month. The main event was a straight line wind system that resulted in the highest wind of the year at Memphis International – 58 mph – on the 5th. There was also some flash flooding on the 9th from slow moving storms. July was the hottest month of the year, with temperatures that averaged about 1.5 degrees above normal, in the mid 80s. In fact, the heat was persistent with only two days that failed to reach 90 degrees and low temperatures that never left the 70s the entire month. Precipitation was well below average, less than two inches for the month. Severe weather was limited.

Finally, summer wrapped up with a break from persistent heat in August as the first week of the month averaged five degrees below normal and the month ending 1.3 degrees below average with several mornings in the 60s. Precipitation ended well above normal (12th wettest on record) with remnants of Major Hurricane Laura contributing both heavy rain and strong wind, as well as a few weak tornadoes in northeast AR on the 28th. Overall, to have two of the three summer months with below average heat was not too bad. Memphis did not reach 100 degrees in 2020.

The cooler than average trend in August was reversed for the first half of September as summer hung around, but was countered by autumn’s arrival in the second half of the month. October saw multiple fronts and large temperatures swings but also ended below normal. September precipitation was hard to come by with just over an inch and a half total, though October made up for the previous month with well over four inches recorded. However, most of that fell on either the 10th, as remnants of Hurricane Delta passed through north MS, or the 28th, with remnants of Hurricane Zeta combining with a front to drop heavy rain. There was one severe weather event, on September 2nd, when scattered strong storms downed some trees and a Tornado Warning was issued as one briefly rotated on approach to the Bluff City.

The winter season began warm and dry in November. In fact, the average high temperature for the month ended up 7th warmest on record, while the average temperature for the month was in the top 10% of all Novembers on record, despite a cold snap to end the month that included snow flurries. There were only four rain days and precipitation ended up only 32% of normal with no severe weather. To end the year, December ended slightly warmer than average as a whole, but featured one of the coldest Christmas Days on record with a high of only 33 degrees. Precipitation was below average until the last two days of the year when three inches of rain fell, yielding an annual total that was two inches above average.

A month-by-month summary of average temperatures and precipitation can be found below. 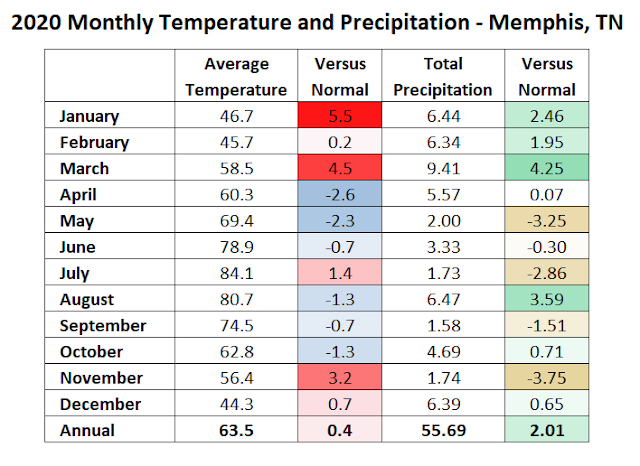 The Mid-South (defined by the National Weather Service Memphis service area of eastern AR, the MO Bootheel, west TN, and north MS) recorded 33 tornadoes during 2020. There were four EF-2 tornadoes, including one in DeSoto County, and one EF-3 in Craighead County, AR, while the rest were rated EF-0 or EF-1.

Within the eight-county Memphis metropolitan area, there were five tornado touchdowns rated EF-0 to EF-2. All five occurred in the pre-dawn hours on January 11. All but one occurred in northwest MS, including the EF-2 in DeSoto County mentioned above, and one touched down in southwest TN (Fayette County). For the year, the NWS-Memphis office received 577 severe (convective) weather reports within their service area. Below is a listing of all tornadoes that occurred in the state of TN in 2020 and severe weather reports in the greater Memphis metro. 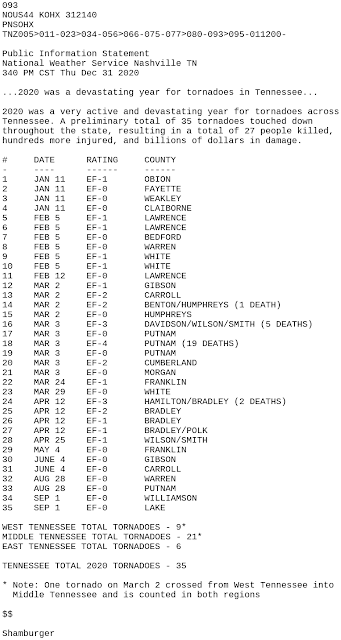 The following represents a statistical recap of the weather for 2020 in Memphis.

Comments: 2020 had the exact same average temperature for the year as in 2019, which ranks both in the top 17% warmest (tied for 24th) in the 147-year historical record at Memphis. However there were fewer extremes in 2020 than the previous year. The number of days with high temperatures at or above 90 degrees was very near normal at 63. There were 25 days that fell to or below freezing, which was well below average.

Records set or tied: There were no monthly precipitation totals that placed in the top ten wettest or driest on record in 2020.  Daily records included:

Comments: 17 days recorded an inch or more of liquid precipitation; two days had more than 2″.

Number of MWN forecasts produced and verified in 2020: 514

MWN’s forecasts extend out five periods (2.5 days, or roughly 60 hours) and the numbers above represent the error/accuracy of the entire 2.5 day period. Historical accuracy statistics can be found here.