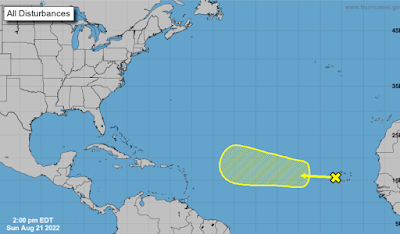 20% Yellow for the African Wave.

Note the usage of the word “could” as in “conditions could support some slow development of this system” and therein is the problem. It “could” develop, yet the question remains “will it develop?” and it’s not a lock on development even though the models last night went all Saturday Night Party Out Crazy before waking up this morning with a hangover!! The models this morning look like Picasso was trying to paint with a hangover again. 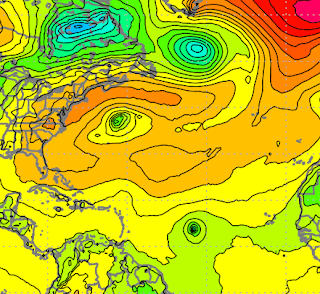 It needs a frame ….doesn’t it?

There’s just something about this summer ….    waves don’t want to spin, we can’t even get a sacrificial weak tropical storm moving into Mexico from the Bay of Campeche and so far it can’t do much more than muster support for Invests. The high is in place that should guide a strong tropical wave all the way home to whichever beach it wants to visit upon landfall. But, no nothing forms. And, while you may think that’s good, no it’s not good. It’s better to have a few Fish Storms that traced patterns in the Atlantic helping evacuate air from the tropics towards the Poles but no we can’t even get Fish Storms. What’s a Storm Chaser to do? Well, a few have been out chasing Monsoons and Flooding but I can’t recall TWC deploying anywhere yet this year and Cantore and crew aren’t doing much broadcasting live from the field. Yes, that’s good as we really do not want Louisiana to get more Major Hurricanes, they need a break! Florida doesn’t want to be that wind break for them and the Islands have been incredibly lucky.

My thoughts from earlier thinking out loud while watching the MMIC loop, and when you have done this as long as I have you know every pattern that is familiar before development happens but this is one for the books. I can’t say I’ve seen this MIMIC Loop pattern before. Watch the loop with me and listen to my thoughts.

Link to that video unless it doesn’t load as for some reason some people say they don’t get the videos but most people do so covering both bases.

One of the best Mets to follow is Brian McNoldy.

He’s filled with knowlege and details.

His thoughts today on the low Ace this year. 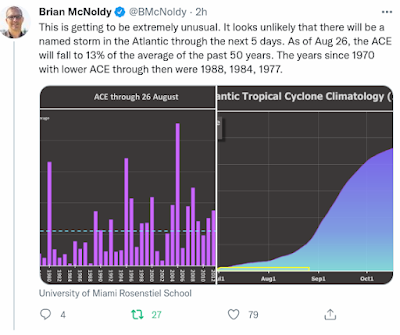 But, here are the 3 years he mentioned in his Tweet.

And, you can see the similarities.

…from that particular perspective.

Anita was a major hurricane.

Even when there’s hoopla over LA NINA.

A La Nina that quacks like an El Nino.

Just throwing in the often mentioned 2013.

Low ACE but measured out consistently.

No long gaps as this year has had…

There are quiet seasons.

El Nino, No El Nino, La Nina even too.

Easier to know researching after the season is over.

This time period reminds me of the song in Hello Dolly… Before the Parade Passes By…. if these waves don’t want to get lost in the Atlantic, they better get their act together before the parade passes them by.

Waste of that name the other year 🙁

But it’ll be back again.