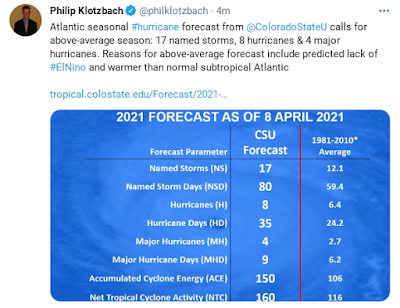 Just a snippet of the many important details.

PLEASE READ IT …take it all in carefully. 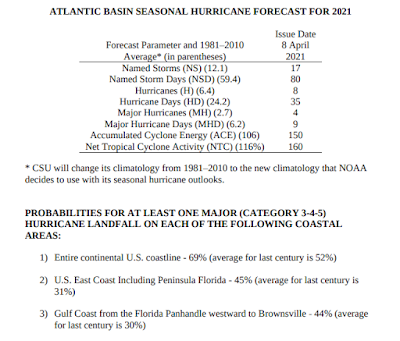 Gulf Coast, as always… always in it!

Please use the link below wisely!

Words matter but graphs are forever!

Again this will be updated in real time.

https://tropical.colostate.edu/Forecast/2021-04.pdf Please read it, it’s detailed and yes the devil is often hidden in the details. Beautiful tribute to the work of William Gray who began this work that Phil is continuing … amazing meteorologists who work hard to educate and inform us on the multitude of intricacies of Hurricane Forecasting 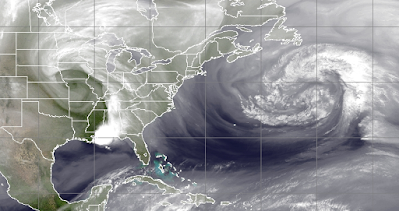 This is today’s water vapor image.

Check that storm out winding up….

The tail down in Louisiana and Mississippi.

It just doesn’t end for some places when Spring, severe weather hits areas still recovering from the 2020 Hurricane Season as we edge closer to the 2021 Hurricane Season.  Old storm out in the Atlantic, next storm not punching the Gulf of Mexico states with the possibility of real stormy weather. 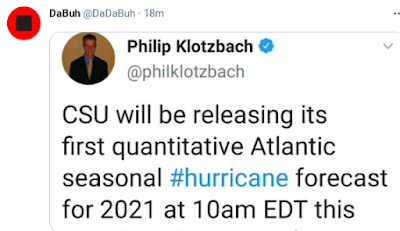 Where do you focus your mind and energy?

Today at 10 AM Phil released his 1st Hurricane Season update, forecast or as I like to think of it “discussion on the elements of this current, coming hurricane season” as his reports are packed with details and forecasts for how it might come together. Quantitative is a good word for it, it’s got so much information you can read it over and over and find new stuff. But still it’s early April a long time away from the actual hurricane season, but this is like the first shot across the bow! There are still so many intangibles between April 8th and the actual Hurricane Season but things begin to come together, you know they are finally almost jellin like a big jello mold that takes a long time to get hard, jiggly and tastes just right. If you turn that thing over too soon it slides off the plate onto the table everywhere all runny and disappointing. To me this begins “the season” as the pollen has covered my porch, baseball is in swing and my tornado chaser friends are all hot and bothered and out and about in search of funnel clouds dipping down out of the sky partially hidden by the trees and hills of the deep south. Last year was a busy chase season in the same places where many are out today in search of severe weather.  So will this year be similar to last year?

Yes, I think so but some different focus on tracks, often years that are similar create similar patterns yet one year the tracks stay off shore and the next year they edge dangerously closer and trace the coastline. Some years the emphasis shifts from Louisiana/Mississippi and Alabama to Texas/Louisiana or closer to the Florida Big Bend and Florida is in it again. We can shoot the tropical breeze on April 8th but it doesn’t really start to blow until you get closer to May.

We see clusters of convection down near Panama.

Rolling off of South America into the EPAC.

Yes, there’s a wave train even in April.

But it’s too low… typical for now.

Eventually it climbs to the North..

..and then we worry and watch more.

Look at that image up above.

Or watch the Gulf of Mexico and old fronts.

Or pay attention to areas off the East Coast.

Where’s your focus when you look at the satellites? Do you still watch weaker winter storms traveling from West to East across the USA or do you begin to peak down into the Caribbean and the wide open Atlantic and maybe even watch what’s coming off of Africa? Many of us are watching all year, yet rarely do I discuss what I’m thinking. Too soon… too early…. eventually I’ll blog and babble every day on anything that seems of a tropical nature. Hoping to be in Florida in June, if that happens I’ll be there then (or sooner) but for now I’m not watching mangoes on the trees begin to grow I’m watching yellow pine pollen paint my porch yellow and it’s covering my leftover shamrocks from March. 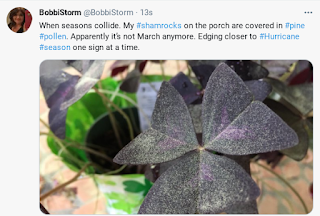 Yeah I know…they need to be washed off …

…maybe I’ll take em in the shower with me.

Supposed to rain on Friday…

Pine Pollen has it’s day and then it’s gone.

I like lots of things in the off season.

I love to watch Earthquakes and Volcanoes.

When I lived in LA I studied earthquakes.

LA was shaking the other day actually….

What’s shaking in your world today?

Stay focused on the present…

…but know the 2021 Hurricane Season is coming.

37 days til NHC puts out their TWO

In tune with EPAC Season on May 15th.