Hurricane Zeta’s strengthening has leveled off this morning, but the storm continues to be well organized and the pressure continues to slowly drop.

The hurricane’s forward speed continues to increase. It is now moving a little east of north at 18 mph.

The track is basically unchanged. 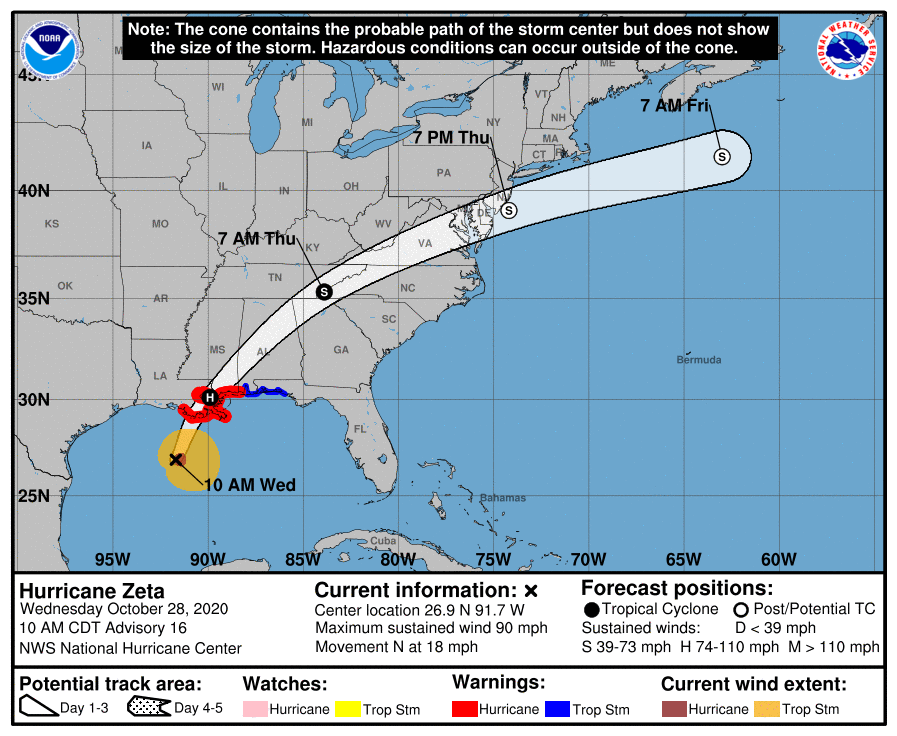 A Storm Surge Warning is in effect for…
* Mouth of the Atchafalaya River to Navarre Florida
* Lake Borgne, Lake Pontchartrain, Pensacola Bay and Mobile Bay

A Storm Surge Warning means there is a danger of life-threatening
inundation, from rising water moving inland from the coastline in
the indicated locations. For a depiction of areas at risk, please
see the National Weather Service Storm Surge Watch/Warning Graphic,
available at hurricanes.gov. This is a life-threatening situation.
Persons located within these areas should take all necessary actions
to protect life and property from rising water and the potential for
other dangerous conditions. Promptly follow evacuation and other
instructions from local officials.

A Hurricane Warning means that hurricane conditions are expected
somewhere within the warning area. Preparations to protect life and
property should be rushed to completion.

A Tropical Storm Warning means that tropical storm conditions are
expected somewhere within the warning area.

DISCUSSION AND OUTLOOK
———————-
At 1000 AM CDT (1500 UTC), the center of Hurricane Zeta was located
near latitude 26.9 North, longitude 91.7 West. Zeta is moving toward
the north near 18 mph (30 km/h). A faster northward to north-
northeastward motion is expected through tonight followed by an even
faster northeastward motion on Thursday and an east-northeastward
motion early Friday. On the forecast track, the center of Zeta will
make landfall in southeastern Louisiana this afternoon. Zeta will
then move close to the Mississippi coast this evening, and move
across the southeastern and eastern United States on Thursday.

RAINFALL: Areas of heavy rainfall, both in advance of and along the
track of Zeta, will impact areas from the central Gulf Coast to
the Mid-Mississippi and Ohio Valleys, and eastward into the
southern to central Appalachians and Mid-Atlantic today through
Thursday. Rainfall totals of 2 to 4 inches with isolated amounts
of 6 inches are expected across these areas, resulting in flash,
urban, small stream, and minor river flooding.