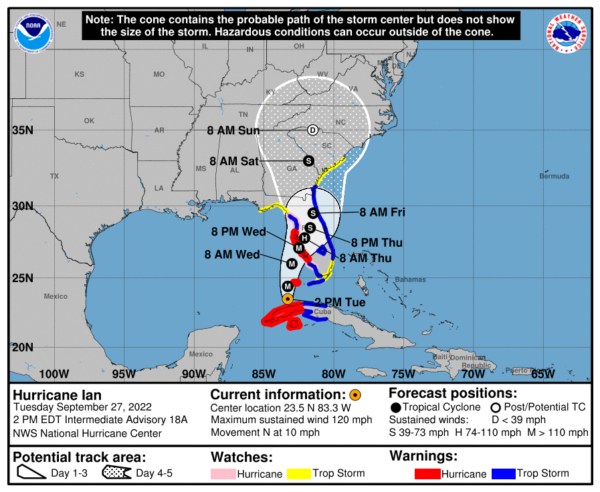 A Storm Surge Warning is in effect for…
* Suwanee River southward to Flamingo
* Tampa Bay
* Dry Tortugas
* Marineland to the mouth of the St. Mary’s River
* St. Johns River

A Storm Surge Watch is in effect for…
* Florida Keys from the Card Sound Bridge westward to Key West
* Florida Bay
* Aucilla River to Suwanee River
* Mouth of St. Mary’s River to South Santee River
* South of Marineland to the Volusia/Flagler county line 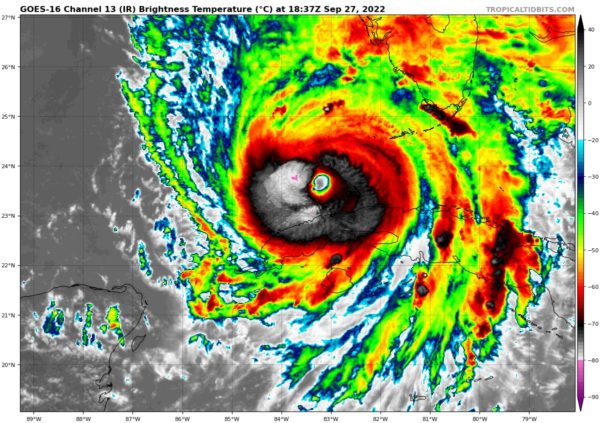 DISCUSSION AND OUTLOOK
———————-
At 100 PM CDT (1800 UTC), the center of Hurricane Ian was located near latitude 23.5 North, longitude 83.3 West. Ian is moving toward the north near 10 mph (17 km/h), and this motion is expected to continue today. A turn toward the north-northeast with a reduction in forward speed is forecast tonight and Wednesday. On the forecast track, the center of Ian is expected to move over the southeastern Gulf of Mexico today, pass west of the Florida Keys later tonight, and approach the west coast of Florida within the hurricane warning area on Wednesday and Wednesday night.

Maximum sustained winds have increased to near 120 mph (195 km/h) with higher gusts. Ian is a category 3 hurricane on the Saffir-Simpson Hurricane Wind Scale. Re-strengthening is expected later today through Wednesday. Ian is forecast to approach the west coast of Florida as an extremely dangerous major hurricane. Hurricane-force winds extend outward up to 35 miles (55 km) from the center and tropical-storm-force winds extend outward up to 140 miles (220 km). The minimum central pressure has dropped to 955 mb (28.20 inches) based on Air Force Hurricane Hunter data.

2. Life-threatening storm surge looks increasingly likely along much of the Florida west coast where a storm surge warning is in effect, with the highest risk from Fort Myers to the Tampa Bay region. Residents in these areas should listen to advice given by local officials and follow evacuation orders if made for your area.

3. Hurricane-force winds are expected in the hurricane warning area in southwest and west-central Florida beginning Wednesday morning with tropical storm conditions expected by this evening. Residents should rush all preparations to completion today.

4. Heavy rainfall will increase across the Florida Keys and south Florida today, spreading into central and northern Florida tonight and Wednesday, into the Southeast U.S. by Thursday and Friday, likely causing flash, urban, and small stream flooding. Considerable flooding is expected across central Florida into southern Georgia and coastal South Carolina, with widespread, prolonged moderate to major river flooding expected across central Florida.