Phoenix police Cmdr. Greg Carnicle was laid to rest Tuesday morning, more than three months after Carnicle was fatally shot while responding to a call at a north Phoenix home on March 29.

Pastor Dave Van Donge of Christ Church of the Valley’s Peoria campus, opened the ceremony by calling Carnicle “one of our city’s greatest heroes,” saying “he really did set the standard for the rest of us to follow.”

He said he hoped Carnicle’s family would feel God’s comfort and peace as they continue mourning the loss before thanking all police officers for their service, saying he believes the desire to become a first responder comes from God. 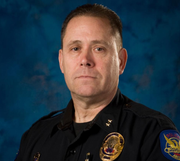 Fallen Phoenix police officers: Cmdr. Greg Carnicle, a 31-year Phoenix police veteran was killed and two other officers were injured when a man opened fire on them during a call about a disturbance between roommates in northwest Phoenix on March 29, 2020. (Photo: Phoenix Police Department)

Carnicle’s four children first detailed their father’s life, including his conversion to the Catholic faith and the moment he met their mother.

Rachel Fritz said her father had a “meaningful and successful” career at the Phoenix Police Department, getting choked up as she talked about the awards and recognition her father earned throughout his career.

“He died doing what he loved, he would not have changed a thing,” Fritz said.

Carnicle was remembered with similar sentiments during a funeral Mass on April 7. The coronavirus pandemic prevented the police department from providing a traditional fallen officer’s ceremony and burial at that time.

Fritz later said she is “driven and empathetic” because of her father, who she said “saw our potential even when we didn’t.”

John Carnicle remembered how his father was “always the life of the party” with his dance moves and Kamikaze shots but noted that Carnicle would only let loose once he knew everyone else was taken care of and having a good time.

He also got emotional when speaking about his father’s legacy, saying “because of him, we are all strong, independent, and faith-filled.”

Carnicle’s daughter, Veronica Wollshlager, said “he was dedicated to the Catholic faith and showed that throughout his life,” adding that his devotion helped pave the way for her and her siblings to “find our way in faith.”

She described him as a “faithful family man,” a man who made an effort to regularly take his children on family vacations “even if it meant eating bologna sandwiches in the Disneyland parking lot.”

CiCi Torzala talked about her father’s connection with his grandchildren, saying he would “reconnect with his child-like wonder” when he was around them.

“He made sure they felt love and joy,” she said, adding that Carnicle oftentimes watched kid movies and played baseball with them, as well as providing them with lots of Cheez-Its.

Next to speak was Kim Vanderford, Carnicle’s sister.

She recalled childhood memories of going camping and canoeing with Carnicle. They had more memories at home together as they were the two youngest in the family.

Vanderford recounted a boating trip to Lake Powell in which their boat broke down and friends had to tow them back to shore. Carnicle wasn’t bothered by the inconvenience, though, opting to sit in the back of the boat and wave to those passing by “as if he were on a parade float.”

It was a memory that was indicative of his “gift in dealing with difficult situations,” she said.

Vanderford rejoiced that her brother is “in paradise” and reminded those gathered to love and forgive one another, as Carnicle would have done.

She concluded her remarks by singing the Christian hymn “Great is thy Faithfulness.”

Carnicle’s friend, Kevin Schmidt, reflected on the memories they created while living next door to one another growing up.

He remembered Carnicle as an “ultra-competitive person” who was a “legend Little League-er.”

Between third and eighth grades, they always found ways to compete with one another — whether it was in flag football or benching.

Though there were times Carnicle’s competitiveness made him stop talking to Schmidt for a few days at a time, Schmidt described his friend as an “amazing” man.

“I believe Greg was a man after God’s heart,” he said.

Their bond was such that each became a godfather to one of the other’s daughters, with Schmidt joking that Carnicle was much better at gift-giving than he was.

He said Carnicle’s greatest gift was grace, adding that he “lived a life that God had designed for him.”

Retired Assistant Chief Dave Harvey of the Phoenix Police Department, a longtime friend of Carnicle’s, recalled Carnicle telling him with a smirk to “suck it up, buttercup” on his first day back on the job after being shot in the line of duty.

It was the start of their 30-year friendship, during which the pair earned a Medal of Valor for restraining a suspect who’d held three sisters hostage on Christmas Eve one year.

Harvey described Carnicle as a “cop’s cop,” but said police work wasn’t what Carnicle did best. Rather, he said Carnicle was best as being a son, a brother, a husband, a father and a grandfather.

He said he hoped it comforted Carnicle’s family to know how many lives he impacted through his service.

“I know it’s not fair, but please know this — your father was loved and respected by many, and he loved you, and even though I’ve retired, know that I will always be there for you.”

Noah Torzala, Carnicle’s 10-year-old grandson, next took to the podium to share a story about “how my poppy became a hero.”

The story talked about how Carnicle “saved so many people” and “hated being in the office, but loved being on the streets.” It detailed the many missed holidays that Carnicle would miss celebrating with his family in order to patrol the community and the time he prayed with a father who’d just been involved in a car accident with his son.

Torzala also described how his grandfather loved being involved in their lives, watching cartoons with them and going to recitals to watch them perform.

“People all over the United States care about him,” Torzala read. “He was even on the news — how cool is that? Can you believe that’s my poppy? We’re all so proud of him.”

Father Gary Regula, the pastor of Saint Jerome Catholic Church were Carnicle attended, offered a short speech in which he emphasized that hope is alive in Carnicle’s surviving family.

Regula finished his remarks just after 10 a.m., at which point a slideshow with photos spanning Carnicle’s life began playing to “Thy Will” by Hillary Scott.

The photos mostly showed Carnicle smiling with his wife and children. Some snapshots were from formal occasions such as weddings and church ceremonies, while others depicted scenes of Carnicle hanging from a vine during a family vacation and posing with his wife on top of a Phoenix police motorcycle.

Carnicle was later laird to rest at Holy Cross Catholic Cemetery. A riderless horse, common in military and police burials, walked through the cemetery before bagpipes filled the air as Honor Guard members carried a folded up flag and box holding Carnicle’s ashes to the burial site.

Regula offered a few words to the family before dousing the objects with holy water.

A 21-gun salute fired three times, and a trumpeter proceeded to play taps just after 11:45 a.m.

Honor Guard members refolded the flag that’d been placed on a table near the family, eventually handing it to Phoenix Police Chief Jeri Williams, who got on one knee to present it to Carnicle’s wife.

Bagpipes again played, this time carrying the tune of “Amazing Grace” throughout the cemetery. The graveside ceremony concluded with a six-helicopter flyover.