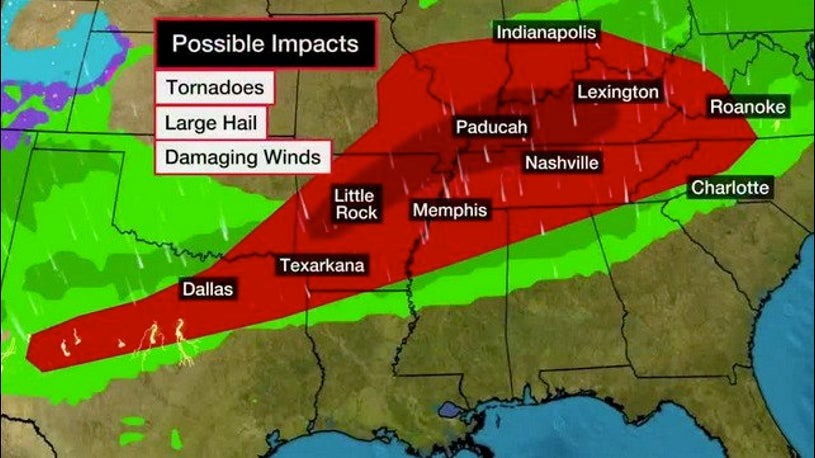 A new round of severe weather is expected to erupt Friday on the high plains of southeast New Mexico and west Texas, perhaps pushing into western Oklahoma by Friday evening.

Storms produced large hail across southern Illinois on Thursday, so much so that Franklin County reported flash flooding mid-afternoon. The hail, which was as large as 2 inches in diameter, clogged storm drains and led to flooding, according to the National Weather Service.

A severe thunderstorm swept through Poplar Bluff, Missouri, in southeastern Missouri, Thursday evening with baseball size hail and damaging wind gusts. Roof damage to a convenience store on the north side of Poplar Bluff was reported.

A second low pressure system will arrive in the Rockies on Friday, bringing another burst of moisture and strong winds aloft.

These ingredients may allow for a few strong to severe thunderstorms to develop in west Texas, southeastern New Mexico and southwestern Oklahoma late Friday.

The main threat will be hail in western Texas and southeastern New Mexico, but a tornado or two and damaging wind gusts are also possible.

Additional rounds of showers and thunderstorms will hit parts of the mid-South and Ohio Valley through the weekend. An inch or more of rainfall is possible through Sunday from northern Texas and eastern Oklahoma to the Ohio and Tennessee valleys.

It won’t rain every day from now through Sunday in these areas, but there will be bouts of showers and thunderstorms with heavy rainfall at times, which might contribute to localized flash flooding. You can see the daily details in the maps at this link.

A weather pattern that typically favors more stormy weather to the east of the Rockies is likely to set up next week.

There will be a southward plunge of the jet stream with colder air in place over the West. When that happens, the jet stream rides farther to the north over the central and eastern United States, which allows milder temperatures and moisture from the Gulf of Mexico into parts of those regions.

Stormy weather conditions often exist in between those two weather regimes. This might set up next week from parts of Oklahoma and Texas into portions of the Mississippi, Ohio and Tennessee valleys.

There could be severe weather or heavy rain in some of these areas next week, but It’s too early to provide any specific details. Check back to weather.com for updates.

The Weather Company’s primary journalistic mission is to report on breaking weather news, the environment and the importance of science to our lives. This story does not necessarily represent the position of our parent company, IBM.

Summer essentials: Tips for enjoying the warm weather with your family